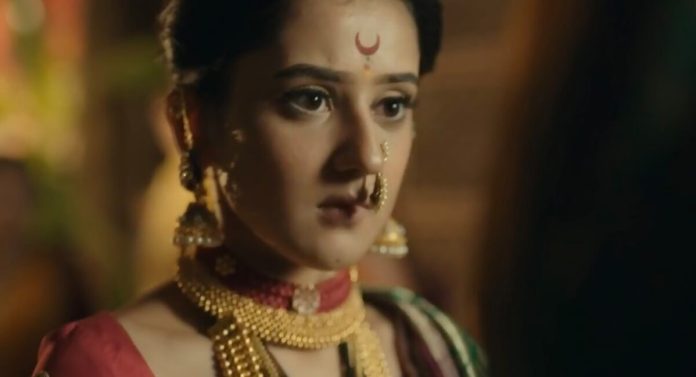 The episode starts with Kashi saying she was fighting for no reason but destiny doesn’t want her and Baji’s togetherness so she won’t waste her time anymore. Radha asks her not to give up but she should stop Baji from leaving. If he leaves, Mastani won’t let him come back again.

Kashi says she doesn’t want to live in fear that she will lose Baji one day also she wants no trouble for Nanashaheb. Radha says then what does she want? Kashi replies she wants to let Baji go with Mastani. If he loves Kashi then he won’t leave but if he doesn’t then she is ready to lose him and she will believe he was never hers. She doesn’t want to go after him. It’s her last test of her and Bajirao’s love.

If he decides to stay here then she will know that he also loved her in same manner she does. Radha asks but will he be able to handle the Peshwai duties after leaving Shaniwad wada. Kashi says he is Bajirao Ballal and he knows it well how to fulfil his duties. Noone will lose anything except her and Nanashaheb. Radha asks her to stop Baji for Nana atleast but Kashi is adamant to not stop Baji.

Mastani comes to Baji and the latter thinks its Kashi. He says he thought Kashi came to ask him about his sudden decision of leaving the wada. Mastani says Kashi won’t help him pack his belongings but she will do so for him. Baji allows her.

Kashi checks the dead bodies of the soldiers and suspects that who sent them here? She tells Surya to ask some experienced people by showing some pieces of clothes of the dead soldiers to them. They might recognise who are these soldiers. She then feels Bajirao’s presence who is following her. Kashi decides not to turn back to see him and she leaves.

Baji thinks Kashi used to feel his presence but why is she ignoring him today? Kashi plays with Nanashaheb and Baji notices them secretly. He recalls his memories with Kashi and is about to enter but stops as Kashi told him not to enter her room at night. Kashi stops him and gives Nanashaheb to him saying he should not leave without spending time with his son.

Baji says Kashi can understand this was the toughest decision for him to leave his family. Kashi says just like everything was not easy for him and he brought a mistress. Nothing was easy for his family members too. But he is leaving them just after one attack against Mastani. How is it justified?

Baji says isn’t it tough for Kashi? Kashi says she accepted Mastani for him, for this state and for everyone’s peace so she doesn’t feel anything now. Nothing hurts her more than that. She tells Baji to spend the night with Nanashaheb as later he might not get enough time to spend time with his son.

Radha tells Chima that she tried to convince Kashi a lot but she is not ready to stop Baji so they have to do something to unite Kashi and Baji. Matang tells Mastani that once Baji leaves this place she will easily get hold on him and will rule this state.

Baji sees that wada has been decorated and he wonders if all are happy because Mastani is leaving. He sees Mastani is giving orders to Matang to pack all his belongings. He thinks Kashi used to do this on her own but Mastani is telling Matang to do all this. Mastani tries to take Nana from Baji but Nana cries. Baji says whole Pune is rejecting her so Nana is also reacting the same.

Baji apologises to Nana for leaving him in order to protect Mastani. But he hopes Nana will understand him. Matang tells Mastani that Kashi knowingly gave Nana to Baji so that he changes his decision overnight. They have to leave the wada early morning. Mastani says she will leave this place with Baji for sure. She wonders why people are decorating the Shaniwad wada.

Kashi learns from the experienced people that the soldiers might belong to Bundelkhand the way they got dressed up. Kashi tells Mahapurohit to say the truth if he is involved in this plan. Mahapurohit takes oath and says he didn’t send soldiers to kill Mastani though he has problem with her religion.

Surya says who can do this then if they are not behind this. Kashi understands who can get the most benefit from this attack. She shows Mastani her own reflection in the water saying Mastani is the attacker and she only asked the soldiers to attack her. Mastani looks nervous.

The episode starts with Baji checking the dead soldiers to find out who is the culprit and he finds a mohar of Chimaji. Baji gets furious at Chima after that and he goes to attack him. He threatens him with sword and asks if he is behind the attack? Chima says yes and he doesn’t want to hide this thing like a coward. Radha and Kashi both get worried for Chima and try to stop Baji but in vain. Baji and Chima start fighting with swords.

Baji defeats him and Radha stops him saying Chima is his brother, how can he do this to him? Chima says he can’t see Baji giving Kashi’s place to a cheap dancer. Kashi is like his mother. Baji breaks a pot with his sword in anger and asks Kashi to punish Chima being the Peshwin. He committed a crime by trying to kill a woman. Kashi gets ready and she says she will punish Chima for his deed in the Sabha.

Kashi blames Mastani for everything as their family is breaking apart because of her arrival. She forced two brothers to fight. She tried to take Kashi’s place whom Chima considers as mother. Due to Mastani’s interference this is happening. Kashi says but Chima wronged her so she will serve justice to her. Baji sits worried and Mastani goes to him. He says he can’t trust anyone in this wada now. They both will go to stay in Kothrud’s wada. Mastani says but she wants to stay with his family.