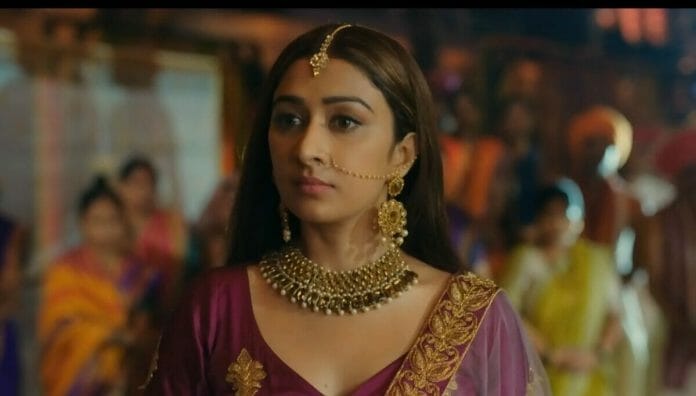 Zee TV show Kashibai Bajirao Ballal currently focusing on a track of Bajirao and Mastani’s growing romance. The truth recently broke Kashi down. She accepted Baji and Mastani’s relationship with heavy heart. Mastani asks Baji to marry her in front of everyone in Puna. Will Kashi permit that? It will be exciting to watch.

Previously it was shown that Kashi learned from Surya that one of the attackers got caught and is unconscious. She ordered Surya that she will talk to the attacker first after his recovery. Kashi stopped Baji from learning Mastani’s truth that she called her soldiers to attack herself. Radha organised a haldi-kumkum function to humiliate Mastani.

Matang advised Mastani to bear Baji’s child in her womb, so that everyone respects her. Mastani got the invitation to attend the function. Ladies made fun of her marriage with Bajirao’s sword, that happened in Bundelkhand.

Radha said that they don’t believe in Bundelkhand’s custom. Kashi feared thinking what would be Baji’s reaction after knowing about Mastani’s insult. Later a heartbroken Mastani asked Baji to marry her in front of everyone. Baji got ready to do so.

In future episodes it will be seen Mastani will ask for her rightful place from Baji. Baji will agree to marry her in Shaniwar wada. He will try to tell Kashi about it, so that he can make announcement of his marriage with Mastani in front of all.

Kashi will make him realise how much he hurt her, but she forgave him all the time. She even convinced everyone to accept Mastani, but now she can’t allow Baji to marry her, else everyone will be against him for marrying a mughal.

Baji will be adamant as he feels Mastani shouldn’t face humiliation. Next day during the sabha Baji will shock everyone by announcing that he will marry Mastani. Mastani will also ask for justice from Kashi.

Kashi will not support Baji and Mastani’s marriage according Bundelkhand’s custom as it happened without Baji’s knowledge at first. Baji will faint hearing her decision. He will not be able to believe she can go against his will.

Will Mastani and Baji get married again?