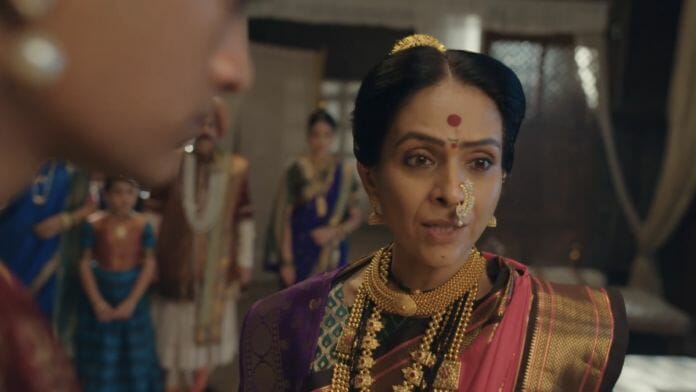 Zee TV show Kashibai Bajirao Ballal will witness an exciting drama. Bajirao and Kashi drank potion to fail Radha’s plan of sending Kashi to Chaskaman and later they will regain consciousness and will face Radha’s wrath. Bajirao’s speech will inspire the people of the state. Will Radha make Bajirao change his priorities? that will be exciting to watch.

Previously it was shown that Kashi and Bajirao fainted after drinking the potion so that Kashi doesnt leave for Chaskaman. Everyone got tensed, and tried to find out why Kashi and Baji took such a step. Shiu taunted Radha, saying Kashi only made Balaji the Peshwa, and Radha is simply jealous of her. The people who attended the festival waited for Kashi and Baji’s recovery. Baji regained consciousness, but Kashi didn’t. So he panicked.

In future episodes it will be seen that Radha will rebuke Kashi and Baji for doing drama just to stop Kashi from going to Chaskaman. People will laugh at Bajirao hearing such a silly cause. she will ask Bajirao to apologise to the people outside who are waiting for their recovery from last night. Baji will admit he did wrong and he will go to apologise. He will reveal the real reason of drinking potion to everyone. He will add that his wife is also a part of Saswad and he will not only fulfil duties towards his state but towards his wife too. Kashi will assure Radha that she won’t become a barrier for Bajirao’s success. Later Kashi will get a news from a lady that Balaji’s life is in danger who went to meet King Shahu. She will inform Bajirao and he will leave to save his father. Radha will get afraid thinking it might be an enemy’s trap for Bajirao and Kashi put his life in danger.

Will Bajirao fall into a trap?