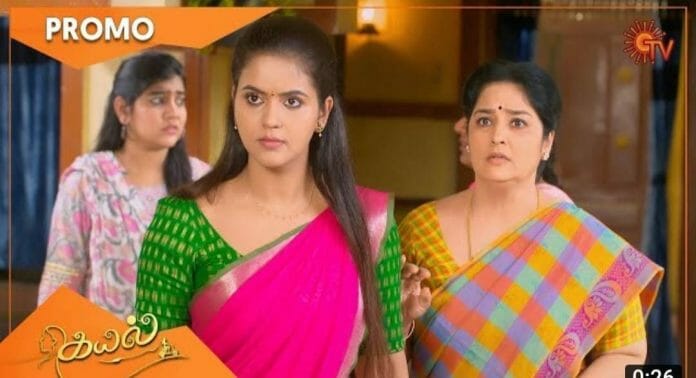 Sun TV’s popular show “Kayal” currently deals with Kayal trying to solve Devi’s issues. Earlier its seen that Kayal failed to collect the money to buy Jewels. Now it will be seen that Kayal learns about Dharmalingam’s cunning Move

In the previous episode we saw; Ezhil waited for Kayal. His friend assured to Ezhil that her scooty will puncher. As they expected it got puncher. Ezhil pretended to cross her unexpectedly. Kayal stopped him. Ezhil lied to her that he was checking his bike condition. He wasn’t using bike for long.

Kayal asked him to carry on than. Ezhil asked his friend Akash to repair Kayal scooty and return it to her. Ezhil offered lift to Kayal. She accepted his offer and went on his bike. Aarthi noticed it and rushed back to home in tears.

Later, Ezhil dreamt like dancing with Kayal. Dharmalingam inquires Arthi the reason for her tears. She narrated to him what happened. Dharmalingam assured Arathi that he will take care of this issue. Later, he provokes Gayathri against Kayal.

In the upcoming episode viewers will see; Dhanam will inform Kayal that Moorthy brought money in finance through Dharmalingam. Kayal will demand Dhanam to call Moorthy. Kayal will argue with Moorthy and return the money to Dharmalingam. She will insult Dharmalingam and kick him out of her house.