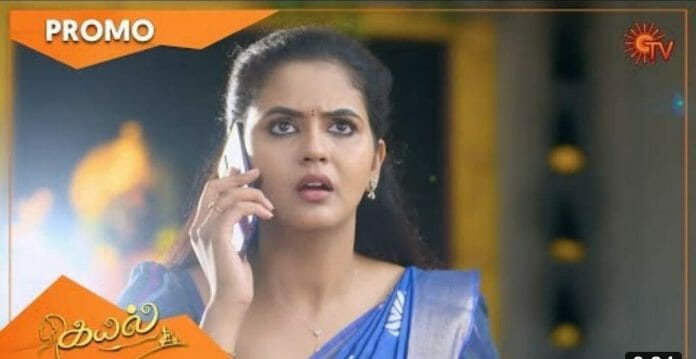 Sun TV’s popular show “Kayal” currently deals with Kayal trying to solve Devi’s issues. Earlier its seen that Kayal failed to collect the money to buy Jewels. Now it will be seen that Kayal try to solve the issues between Moorthy and Aarumugam.

In the previous episode we saw; Aarumugam said to Moorthy he have all rights to scold and beat him, but don’t mention him as betrayer. Moorthy apologized to him for misunderstanding him.

Later Vedhavalli’s sister visited her house. She enquired their well about? She searched for Devi there and informed to them she was here to invite newly wed couples for feast. She noticed Vignesh was looking dull.

Vedhavalli tried to manage the situation there but Vignesh revealed the truth to her. Mom kicked Devi out of house the next day of their marriage. Vedhavalli said to her Kayal cheated her by giving 20 sovereign duplicate jewels.

In the upcoming episode viewers will see; Kayal will phone Ezhil to meet him in temple. He will assure to meet her in 10 minutes.

Moorthy will inform to Dharmalingam that Vedhavalli accepted Devi as her daughter in law without dowry. He will be shocked to hear it. Meanwhile Ezhil’s father will call Kayal and share something to her.