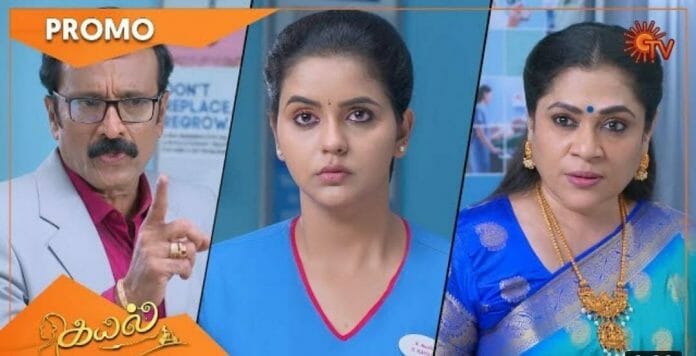 Sun TV’s popular show “Kayal” currently deals with Kayal trying to solve Devi’s issues. Earlier its seen that Kayal failed to collect the money to buy Jewels. Now it will be seen that Kayal will be furious

In the previous episode we saw; Anbu joined in food delivery company as a deliver boy. He thanked his friend for his recommendation. His friend congratulated him. He narrated to him it’s tiring job. He might perform well to get a credit. He wanted to deliver food on time without minding weather condition.

Anbu assured to him. Later, Kayal’s friend teased her for taking care of Ezhil even after she demanded him to don’t show his face to her again. She said to her that one day she will fall in love with him.

Kayal denied it. She challenged her one day it will happen. Later Dharmalingam got frustrated thinking about the insult he faced. Moorthy came to meet him. He insulted him infront of all.

In the upcoming episode viewers will see; Gowtham will demand Shankari to pay extra 1 lakh. Shankari will lashes out at Kayal after learn the reason. Kayal will argue with her and accused Ezhil as the reason. Chief will inquire the problems and suspend Kayal from her job for one week.