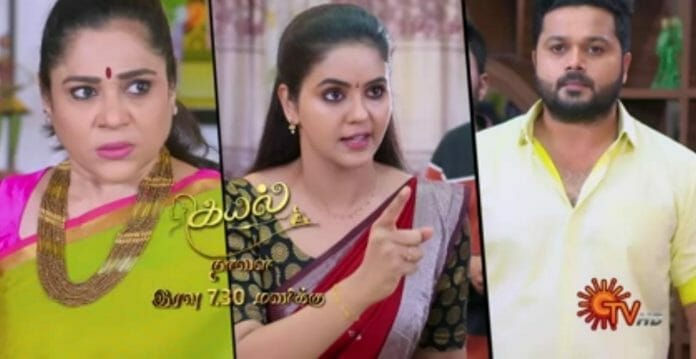 Sun TV’s popular show “Kayal” currently deals with Kayal trying to solve Devi’s issues. Earlier its seen that Kayal failed to collect the money to buy Jewels. Now it will be seen that Moorthy will decide to start a new business.

In the previous episode we saw; Dhanam searched for her daughter and ended up seeing her husband dressed neatly surprise her. Moorthy said to Dhanam that he gonna start a new business and change this family situation to better. He don’t wanna get insult in front of his family members hereafter. He said to her he will meet his Periappa to get money to start a new business.

Dhanam said to him he was not gonna change at all. She gave her nuptial chain to him to start a new business. Later Ezhil met doctor and asked her to help him. He gave money to her and demanded her to give it to Kayal. She met Kayal and gave that money.

She thanked her but unexpected she overheard her conversation with Ezhil. She returned the money to her and demanded her to give it to Ezhil. Periappa learnt Moorthy gonna start a new business and decided to stop it.

In the upcoming episode viewers will see; Kamatchi will call Kayal and inform to her that Gayathri created issue in home. Later Kayal will reach to Ezhil house.

She will question Gayathri Is she has rights to question about her upbringing? She will add that she didn’t raised her son properly first, Ezhil will come there but Kayal lashes out at him.