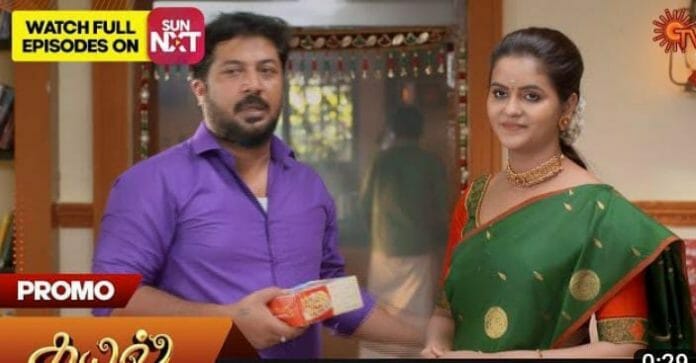 Sun TV’s popular show “Kayal” currently deals with Kayal trying to solve Devi’s issues. Earlier its seen that Kayal failed to collect the money to buy Jewels. Now it will be seen that Dharmalingam planning to stop Anbu attend the police training

In the previous episode we saw; Kayal pretended like talking nice with Dharmalingam. She reveal to him that Anbu got police selection letter. Dharmalingam got shock to hear it. Vadivu cursed him fail in the physical test.

Kayal smirked at them and challenge Subrahmanyam to compete with Anbu. He lost in front of Anbu. Dharmalingam and Vadivu was shocked to see it. Later, Devi prepared lunch for her family. Vedhavalli planned to create a problem there. Kayal family visited Devi.

Vedhavalli pretended like welcome them. She lied to them that she was praying for her heir so she won’t allow them to take non veg. Moorthy suspected her. Kayal found the delivery boy and gussed she planned to insult them. Kayal gave a fitting reply to Vedhavalli.

In the upcoming episode viewers will see: Kayal will buy clothes for her family. Arumugam will be emotional seeing Kayal considering him as her family member. She will gift a dress for him.

Later, Anbu will request Kayal to do that favour for him. Later, Dharmalingam will call the police and give a wrong information to him against Anbu. Kayal will celebrate Pongal with her family