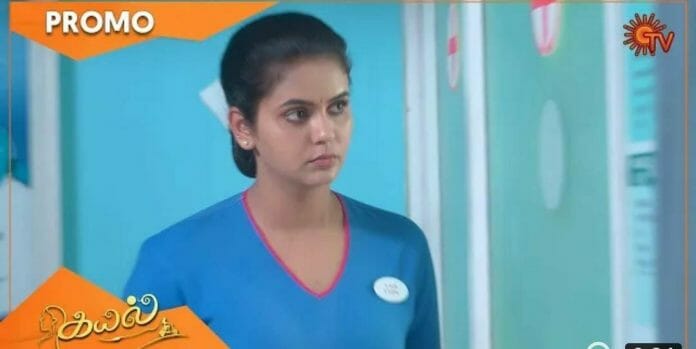 Sun TV’s popular show “Kayal” currently deals with Kayal trying to solve Devi’s issues. Earlier its seen that Kayal failed to collect the money to buy Jewels. Now it will be seen that Kayal will doubt Gowtham

In the previous episode we saw; Kayal learnt that Dharmalingam forced Moorthy to drink alcohol. He refused to drink but he demanded him to drink it. Kayal got furious hearing it. Later, Kayal brought alcohol. Few mens got shocked to see her holding alcohol.

Kayal drove to Dharmalingam house. She made Subrahmanyam drink it forcefully. He struggling to breath after drink it. Vadivu argued with Kayal for forced her son to drink alcohol. Kayal gave fitting reply to her.

Dharmalingam came there and argued with Kayal. She lashed out at him for forced Moorthy to drink. She complained that Dharmalingam stooping low to take revenge on them. She challenged him to develope Moorthy’s catering business than him. She left from there. Later, Kayal visited Devi’s house to demand Devi, apologise to Moorthy. She argued with her.

In the upcoming episode viewers will see; Kayal will slap Devi in angry and warns her to don’t talk with her until she give 30 sovereign gold to Vedhavalli. Devi will think that she pretending to be hating Kayal to save them from Vedhavalli.

Later, GM will ask Gowtham and Kayal to take a good care of new patient. Patient will offer 5 crores amount to Gowtham for give fake report. Kayal will overheard their conversation.