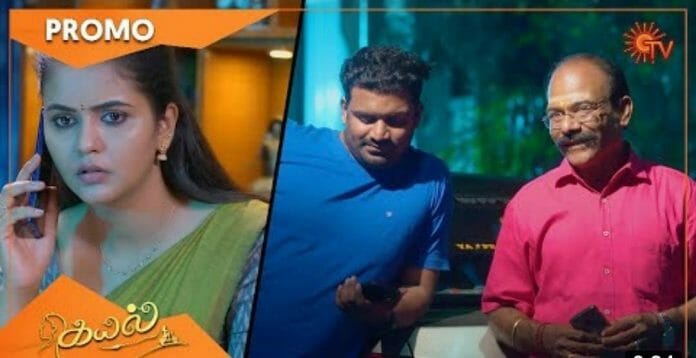 Sun TV’s popular show “Kayal” currently deals with Kayal trying to solve Devi’s issues. Earlier its seen that Kayal failed to collect the money to buy Jewels. Now it will be seen that Dharmalingam to plot against Anbu

In the previous episode we saw; Kayal was happy to see Moorthy got new Annadhanam order. Moorthy hesitated to take the order reasoning they used to give that order to Dharmalingam. They assured to Moorthy that they won’t misunderstand him. He asked them to give the advance money to Kayal reasoning she was his second mother.

Dhanam felt happy to see his change. Later, Dharmalingam got disappointed seeing the business getting dull. He complained to his son that they were facing loss in this field.

Moorthy came there and informed to him that he got new order. He will do it well. Dharmalingam got chest pain after heard it. Moorthy demanded him to die after he became rich. Dharmalingam glared at him.

In the upcoming episode viewers will see; Dharmalingam will be determined to stop Moorthy. He will notice that Anbu dancing on street with his friends. He will decide to take revenge on him.

Dharmalingam will inform Police something. Police will arrest Anbu’s gang. Kayal will call Anbu but police answer to her. She will get shock to learn that Police arrest Anbu.