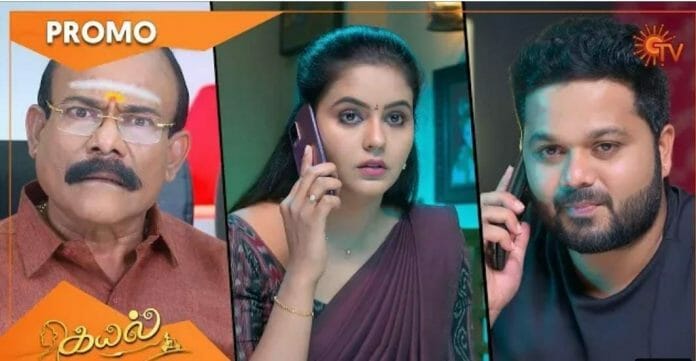 Sun TV’s popular show “Kayal” currently deals with Kayal trying to solve Devi’s issues. Earlier its seen that Kayal failed to collect the money to buy Jewels. Now it will be seen that Kabilan to help Kayal

In the previous episode we saw; Police misunderstood Kayal’s friend as culprit. Kayal stopped Police from arresting her and said to them she had proof in her hand. She played the audio record there to prove her innocence. Its clearly saying Gautham whom asked them to put injection. Police asked Gautham why did he suggested to put wrong injection.

Kayal said to them that he was angry on her. Whenever he gets time he take revenge on her. She supported her once that’s why he took revenge on her. Police proceed legal action there. Chairman dismissed Gautham from his job.

Later Moorthy got excited seeing the collection amount. He shared to Periappa about it. He got shocked hearing it. Later Moorthy mocked at Kayal in home. Perippa planned to close Moorthy’s business.

In the upcoming episode viewers will see; Broker will visit Perippa house and inform him groom family members ate food in Moorthy’s hotel. He will get shock to hear it. Later Kayal will get a gift box. Kabilan will call Kayal and tell her it’s her gift. She will find out a cheque in it. Kayal will put a condition to him to accept it.

What will happen next? What will be Kayal’s condition? Will Ezhil get caught?