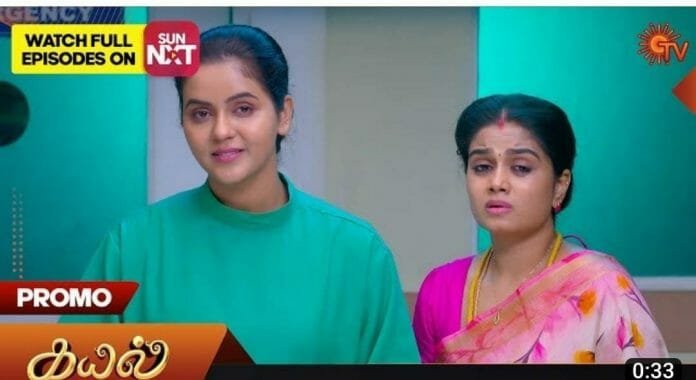 Sun TV’s popular show “Kayal” currently deals with Kayal trying to solve Devi’s issues. Earlier its seen that Kayal failed to collect the money to buy Jewels. Now it will be seen that Dharmalingam’s plan flopped

In the previous episode we saw; Devi informed her family members about Kayal’s wrong decision. Family members reached to the hospital and created a big issue there. Dharmalingam pretended like helping Kayal to return money. Ramya reached there too.

Sanjeev threaten them that Kayal signed in the form. MD stopped the surgery of Kayal reasoning her family members created a issue outside. Kayal confronted her family. She shared with them that she agreed to donate her kidney to Sanjeev. She brought this money to give 30 sovereign gold to Devi.

Ramya told her lets return the money. Dharmalingam gave money to Sanjeev to get a good name. Kayal insulted him for trying to buy her using this money. She warned him to stay away from her matters.

In the upcoming episode viewers will see; Kayal to insult Dharmalingam for using the situation favour to him. Anbu and Moorthy will request Kayal to change her decision. But she is adamant in her decision. Doctor will take Kayal to operation theatre. Sanjeev father will come there and stop

Kayal. He will tell her that she is young. She shouldn’t waste her life for him. She might back off from her decision for her family members love for her. Sanjeev will stop him. Sanjeev father will reveal to him that he has same blood group of him.

He doesn’t love him but pretended to be for his money. He will say to Kayal money is nothing in front of her character. Later, Dhanam will demand Moorthy to reveal the truth to Kayal. She will confront him.