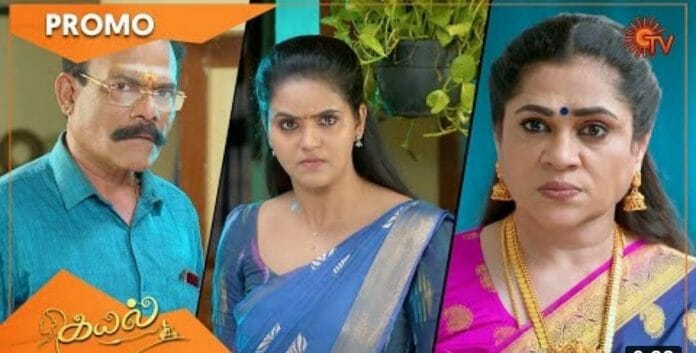 Sun TV’s popular show “Kayal” currently deals with Kayal trying to solve Devi’s issues. Earlier its seen that Kayal failed to collect the money to buy Jewels. Now it will be seen that Kayal finds out the truth.

In the previous episode we saw; Anbu pushed down the sweets in anger. Moorthy questioned him why did he behaving like this? Anbu argued with him that Kayal ruined his life. Because of her he can’t able to become a police. She didn’t give three lakhs money to him ti pursue his dream and used that money for Devi.

Dhanam said to him that Kayal whom wished to see him become a police so don’t complaint her. Moorthy also supported him. Anbu ended up arguing with him.

Kamatchi got disappointed seeing Anbu got drunk. He closed the door in angry. Kamatchi asked Dharmalingam to help her. Later Kayal found out Shanthi planned something and played a trick with her to save Ezhil.

In the upcoming episode viewers will see; Shankari will question Kayal what did she done to her son? Kayal will argue with her for accusing her unnecessary.

Later, Moorthy and Anbu will end up in fight. Dharmalingam will use that chance against Kayal. Anbu will blame Kayal as the reason behind his state. Kayal will demand Dharmalingam to leave from her house. She will insult him.