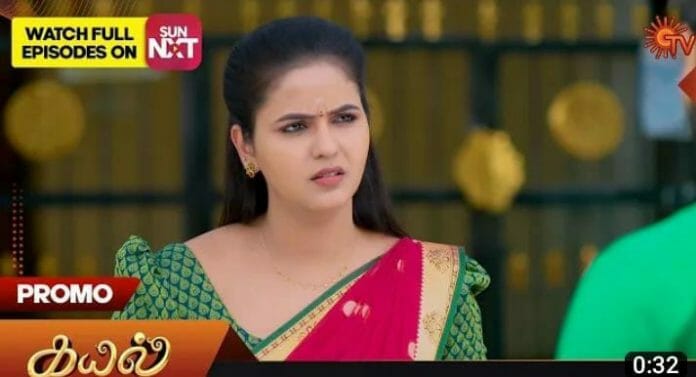 Sun TV’s popular show “Kayal” currently deals with Kayal trying to solve Devi’s issues. Earlier its seen that Kayal failed to collect the money to buy Jewels. Now it will be seen that Kayal to insult Dharmalingam

In the previous episode we saw; Dharmalingam planned to ruin Moorthy’s catering opening ceremony function. Vadivu seek a magician help to destroy Kayal family. Dharmalingam supported her. Dharmalingam attend the function and shared with his friend that he helped Moorthy to start the catering. Kayal insulted him in front of his friend.

Later, Vadivu tried to place the secret things in pooja. Kayal stopped her. She managed the situation there. Later, Kamatchi served sweets to everyone. Kayal insulted Dharmalingam by ignoring him. Vadivu disliked it. She complained to Kayal about it.

Kayal gave lime juice to them. After they drank it she revealed to them that she squeezed the same lime to prepare juice which Vadivu kept in pooja. She was shocked to hear it.

In the upcoming episode viewers will see; Kayal will attend a interview in the new hospital. Doctor will inform Kayal that she will appoint her as chief nurse but she want to give a reason why did she left from previous hospital. Later, Anbu will fear to get caught. Kayal will confront him.