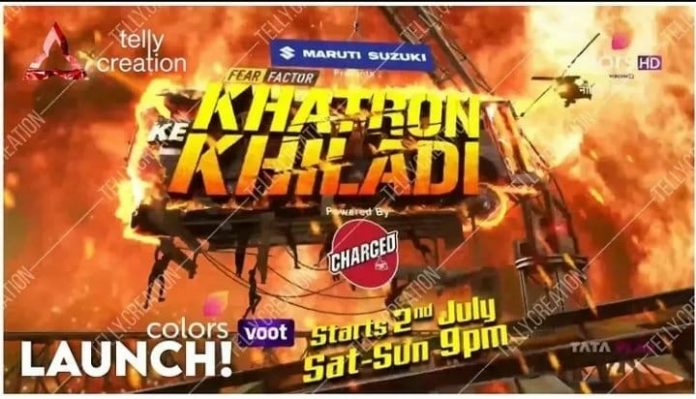 The episode starts with Rohit announcing that the previous weeks team will remain the same and both the teams will compete against each other as the losing team will go for elimination. He says that a captain will decide which contestant from their team will perform the stunt and the captain will also be determined by a stunt.

Among the two who sustains till last, their team will get 10 points extra. All the contestants perform the stunt together and Mohit from his team and Tushar from his team where the only people who sustained till the end. They were declared the captains. Among them Mohit falls in water first and so Tushar’s team gets 10 extra points. Rubina gets into a spot accident and rushes to medical examination. She would not participate in the upcoming stunts.

Rohit announces the first stunt for the week. Six boxes are shown with each contestant having three box. So totally three contestants have to perform the stunt from each team. A spanner is attached with a wire and will be present in a puzzle way.

Mohit sends Faisu for first two boxes, Jannat for third and fourth box and Kanika for last two boxes. With much difficulty they manage to enter the last box but time gets over. Next Tushar selects Nishant for the first two boxes, Sriti Jha for the third and fourth box and finally Chetana for the last two boxes. They perforns the stunt but time gets over when Chetana was unhooking the spanner in the fifth box only. So Mohit’s team becomes winner and gets 10 points added.

Next a creepy crawlies stunt is announced and one contestant from each team must participate. Their eyes will be blinded while their head will be wrapped to a glass sheet. Various creepy crawlies will be put inside it and the contestants must guess the creepy crawlies just by feeling it and not touching. Since Rajeev didn’t perform any stunt he’s mandatorily chosen from Tushar’s team.

Finally a end game stunt is announced. Four contestant from each team must participate. A platform much above the water is shown and the platform is made of glass. The platform is separated by 2 parts and 10 segments. The contestant must move to the right hard glass and must pick the flag and should go to the next platform closer to it to complete the stunt.

In case if the contestant stepped on soft glass the glass will break and they’ll fall in water too. First Tushar team performs the stunt with Rajeev cheering for them. They manage to reach till the Last segment. Next Mohit’s team completely performs the stunt and managed to reach the winning platform with three flags. They gets very happy as the scores are tie now.

The episode starts with Rohit asking the previous stunt winner Faisu to choose the first contestant for the next stunt for their team. He also warns that Nishant team already have two fear funda contestants while Rubina’s team has only one. He says in case Nishant’s team loses in the upcoming stunt then their team will go for elimination stunt straight away. Rohit announces the next stunt to the contestants which is a water stunt. The contestant will be present in a glass box above the water and a small glass box with lever will be present inside their glass box. It will have three locks on it.

Faisu chooses Jannat for the stunt while Chetana chooses Rajeev. Rohit gives an advantage task to Rubina and Nishant for them to choose who would perform the stunt first among Jannat and Faisu. Nishant wins the task and chooses Jannat to go first. Jannat perforns the stunt but she fainted under water and was forced to abort the stunt due to medical reasons.