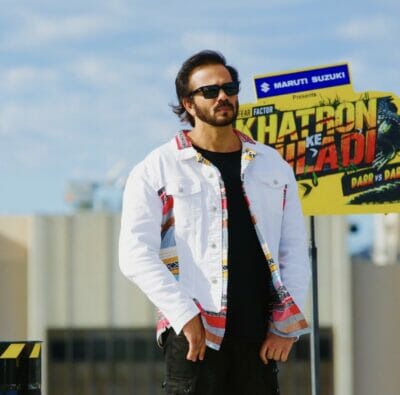 The episode starts with Rohit having a discussion with contestants about who’s going to be the winner. They all have fun and Rohit explains the first stunt for Varun, Vishal and Rahul. A pole with two flags is present horizontally at the top. The contestant must crawl on the pole and should collect the two flags. After collecting the two flags the contestant must reach the end of the pole where a very small plate like platform is present. The contestant must stand on the plate and should jump to get the third flag that is hanging in air. Once the contestants collects the fjord flag the stunt gets completed. First Vishal performs the stunt and successfully completes it. Next Varun performs the stunt and completes it too. Finally Rahul’s turn comes but he couldn’t step on the pole due to his back issues. He aborts the stunt. Thus Vishal and Varun gets safe while Rahul gets fear funda for elimination stunt.

Rohit lashes out at Rahul and Shweta for aborting stunts in finale. He starts explaining the elimination stunt for them. An aerobatic plane is shown and the contestant will be present inside the plane. The speed and acrobat of the plane increases every two minutes. The contestant must hold on to the red button near their chest and the moment they let it go a white gas comes out from behind meaning that the stunt is done. The contestant who stays in the plane for more time will become the winner. First Rahul performs the stunt and gives it up in 5 min and 27 Sec. Next Shweta performs the stunt after lots of forcing from Rohit and fellow contestants. She gives it up in 9 min and 9 Sec. Shweta emerges our as winner and gets relieved of her fear funda. Rahul gets eliminated and joins Abhinav and Sana as supporters for the contestants.