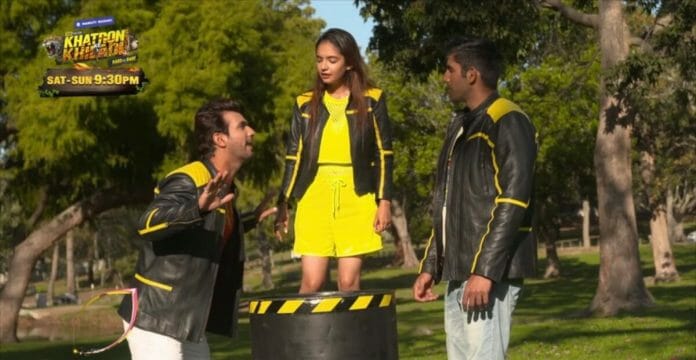 Colors TV popular show Khatron Ke Khiladi is back with season 11 to entertain its ardent fans of the show. Earlier it’s seen that all the contestants performed fear funda stunts together while few got relieved by winning their stunts. In yesterday’s episode we witnessed Anushka getting eliminated from the show.

In Saturday’s episode we have witnessed, Rohit gave a wild card stunt for Aastha, Saurabh and Vishal whose elimination felt unfair. Vishal won the stunt and joined the contestants to continue his Khatron Ke Khiladi journey. Rohit gave a twist by giving fear funda to all the contestants and everyone performed fear funda stunts together. The winners got relieved off their fear funda. Vishal and Sana won the tear gas stunt, Rahul won the creepy crawly stunt and Shweta won the dynamic stunt and all the four got safe.

In Sunday’s episode we witnessed, the remaining fear funda contestants continued performing the stunts. Among them Divyanka won the creepy crawlies stunt and got relieved off her fear funda. Abhinav won the underwater stunt and got safe too. Varun, Arjun and Anushka competed against each other in the elimination stunt in which Anushka got eliminated from the show.

In the next week of Kkk, the audience will witness the contestants fighting for Ticket to finale. More and More dynamic stunts on the way and every contestant will give a tough fight for each other. A funny promo of Rahul and Divyanka praying to win the ticket to finale hinted the future to audience.

So whom do you think will win the Ticket to finale? Who will get eliminated next after Anushka?