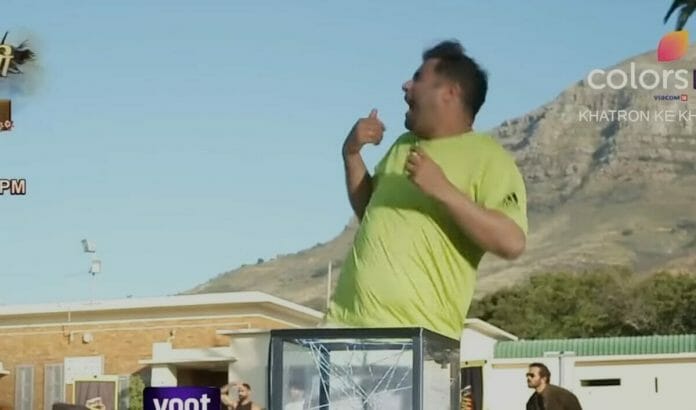 Colors TV popular show Khatron Ke Khiladi is back with season 12 with an impressive set of contestants as every year. It is the sixth week and one more contestant bids adieu to the show.

In today’s episode we witnessed that more than stunts it’s the contestants who seem to have lots of cold war happening behind the camera. Now it will be seen that Kanika and Nishant will do a partner stunt where Nishant will get bitten by a scorpion.

In today’s episode we witnessed, A tie breaker dynamic stunt was given to the two teams where only Tushar managed ti complete and gained points for his team. In the next creepy crawlies stunt lots of drama took place between Rubina, Tushar and Mohit where both Mohit and Tushar had complaints about Rubina.

Tushar was angry that he was forced to send Rajeev to the stunt while Mohit got upset when Rubina told that she was scared of creepy crawlies. Rubina and Jannat performed the stunt and successfully completed it.

Next Rajeev and Sriti were about to perform but Rajeev aborted it. Mohit team gained points and it was a tie again. Both the captains had to choose one weak contestant from their team for elimination stunt.

Tushar chose Chetana while Mohit chose Rubina. Again a series of conflicts raised but in the end Rubina and Chetana performed the water stunt where Rubina completed it while Chetana aborted it. Chetana got eliminated.

In the next episode we will witness, Kanika and Nishant will perform a partner stunt where Kanika will be locked in a box with creepy crawlies while Nishant have to get the keys using his mouth from a box filled with scorpions. Nishant will get bitten by scorpions. Sriti Jha will show off her talent impressing everyone.