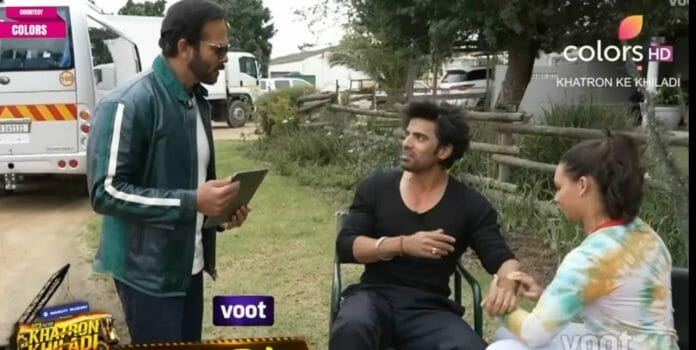 Colors TV popular show Khatron Ke Khiladi is back with season 12 with an impressive set of contestants as every year. It is the eighth week and its a group stunt week. The contestants will already have fear funda and they must perform stunt to get rid of it by completing in the first place. As far yesterday Tushar, Nishant and Jannat got rid of their fear finds. Now it will be seen that Rubina will perform a terrific stunt with car.

Previously we have seen that All the contestants were given a fear funda and they all competed together in the stunt. First one was a tear gas stunt where Nishant emerged out as a winner and got rid of his fear funda.

Next one is group stunt where the contestants have to walk on rope from one end to another and come back. Tushar came first and got rid of his fear funda. Finally it’s a creepy crawly stunt where everyone participated together with different creepy crawlies. Jannat emerged out as a winner and bid adieu to her fear funda.

In the next episode we will Rubina enjoying while performing a car stunt without fear. Mohit will hurt his hand during the stunt. Sriti and Faisu will return as wild card contestants but it’s yet to be seen whether both got the opportunity or competing against each other to become the wild card contestant.