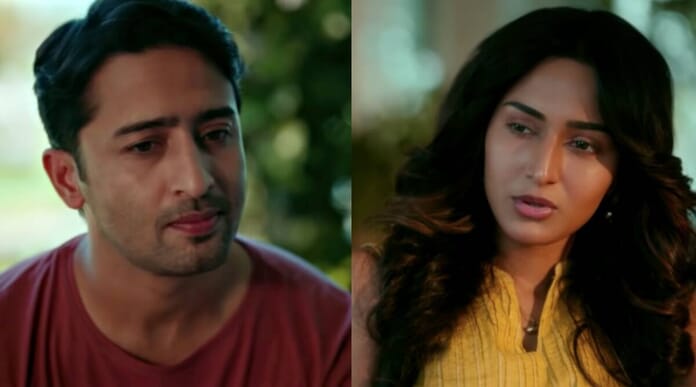 The episode starts with Dev and Sonakshi taking Ayush with them but Ishwari stops them saying she kept Pooja for Ayush and they can’t go anywhere. Ayush says he wants to go but Ishwari says Pandit is coming and pleads Ayush to go other day. Dev takes him in while Sonakshi stands mum. Dev makes them speak with Ayush through video call. They asks if he’s fine. He says that he’s fine and wanted to meet them but a rude aunty there is not letting him meet them. Dev says there’s a misunderstanding and says about Pooja. Mr. Varma says that its fine and advises Ayush to not feel bad as his Daadi arranged Pooja for him. Ayush agrees and cuts the call.

Mami and Ishwari sit in Pooja and Ishwari recalls Dev throwing tantrums saying that he will only bow in front of her. Suhana comes there and sits in front of Pooja saying that it’s for her. Ishwari says that her Pooja is over just recently and this is for Ayush. Suhana’s face falls hearing it. She sits at the back and Dev and Sonakshi joins the Pooja. Ayush comes there and sits on front of Pooja. Suhana recalls all the attention Ayush gets from Ishwari from the day he entered the house and looks angrily at him. Pandit starts the Pooja and asks for Ayush’s parents name. Ayush is about to take Rohit’s name when Ishwari intervenes and says that it’s Dev and Sonakshi shocking everyone especially Ayush and Suhana. Suhana leaves the place angrily and Sonakshi notices it.

Pooja continues and Sonakshi hears glass breaking sound inside. She rushes inside leaving Pooja and finds Sonakshi broken a glass. She stops her from moving further and starts cleaning the mess. Sonakshi asks Suhana that why didn’t she have the food kept for Pooja. Suhana says that the Pooja is for Ayush and she don’t want to have anything from it. Ishwari is upset that Sonakshi is attending Suhana leaving Pooja.

Sonakshi’s friend tries lifting up her mood using fruits. Sonakshi shares about her tensions with him and says she couldn’t connect with Ayush and everyone are forcing her to create a bond. He says that Ayush is innocent and has no fault in this for which Sonakshi says that she knew it but doesn’t know how to handle the situation. Her friend advises her to speak with Dev as that’s the only way they can solve the problem. Sonakshi gets into thinking. On the other hand, Vicky comes to Dev’s cabin while Dev is lost looking at his family picture. He shows him the bounced cheques due to the difference in his signature. He asks Dev if he’s fine while Dev is stressed out.

Precap : Sonakshi cries and shares with Dev that she couldn’t handle between her kids while Dev gets disappointed with her.