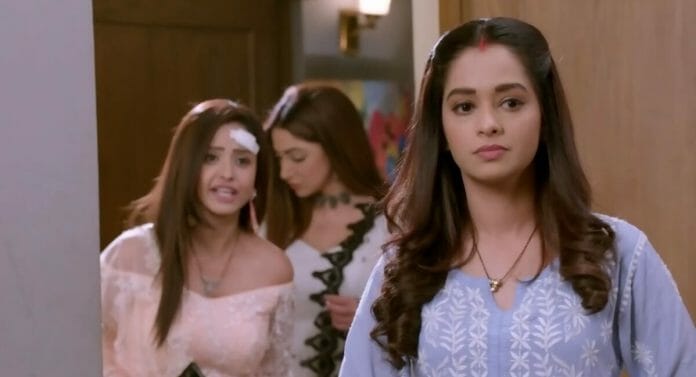 The episode starts with Prachi preaching to Rhea about the importance of Mangalsutra and saying it gives her the right to keep safe and responsibility of her husband and nobody can take it away. Not even you or Ranbir can take it away. Prachi tries to go from there. Alia stops her by saying it is your habit to turn round and round and suppress the main topic. Alia says if a person does theft there is a reason behind it and because of it he gets caught. Prachi counters her and leaves. Pallavi stops her and says she also thinks she made the theft of Rhea’s Mangalsutra and asks her to give it back.

Prachi says to ask her irresponsible Rhea as she lost it. Pallavi says Rhea is not irresponsible if you think she is why don’t you help her by finding it. If you did find it Rhea will apologize to you. Prachi says she will never do it but she may do it by your word and this will be interesting. Deda comes to Prachi and asks her what happened.

Meanwhile, it is shown Rhea talks to Pallavi she did not know Prachi will fall to this level as you commented on her she stole my Mangalsutra. Shahana says she will not do anything like that. Alia says she will bring Mangalsutra but no from but from Prachi’s room. Ranbir shouts at all of them. There is an argument every day you made it a source of entertainment. If you say one more word the doors are open. Alia asks so you are saying you will throw us out. Ranbir repeats and says the doors are open and adds I will leave the house. Pallavi asks you will go and can you live happily without us.

Ranbir says nobody will be happy leaving their family and asks what can he do when his family is like this and says it is better to live alone. Rhea blames Prachi and says because of her you are thinking of leaving her. Rhea says the importance of Mangalsutra to her to Ranbir. Ranbir says he will see what Prachi is doing. Shahana says at least sometimes be original and you copied Prachi words and said to Ranbir. Rhea counters her.

Dida says to Prachi what they think you stole Rhea’s Mangalsutra. I will talk to Pallavi. Prachi stops her and says Pallavi said Rhea will say sorry to me if she finds her and I want her to make say sorry to teach her a lesson. Ranbir comes and seeing it Prachi goes to Rhea’s room. Dida tries to talk to Ranbir.

Ranbir says something and goes after Prachi. Ranbir asks Prachi if what she said does she mean it or just said it like that. Prachi says she has to find Rhea’s Mangalsutra. Ranbir forces her to answer the question. Prachi says what she said everything outside is right as she learned it from her mother. Prachi also points out she said it is because of responsibility not because of love and when there is no love there is no relationship between us. Hearing it Ranbir has tears in his eyes.

Seeing it Prachi turns away from him. Ranbir sees the Mangalsutra in the towel in Rhea’s room. Ranbir points to it by saying. Prachi sees it and when she sees Ranbir he goes away. Deda is shown to be talking with Pallavi and Alia about Prachi. Prachi brings Mangalsutra and gives it to Rhea. Rhea accuses her. Prachi signals Ranbir and asks him to say the truth. Ranbir says he is going away. Ranbir asks Prachi why is she not saying please. Prachi asks this time with please. Ranbir says Prachi found Rhea’s Mangalsutra in the towel in Rhea’s room.

Prachi says you used this towel yesterday right you didn’t notice when it is not on you. You don’t give importance to it like us. Prachi asks Pallavi you said that if I bring her Mangalsutra she will say sorry to me.