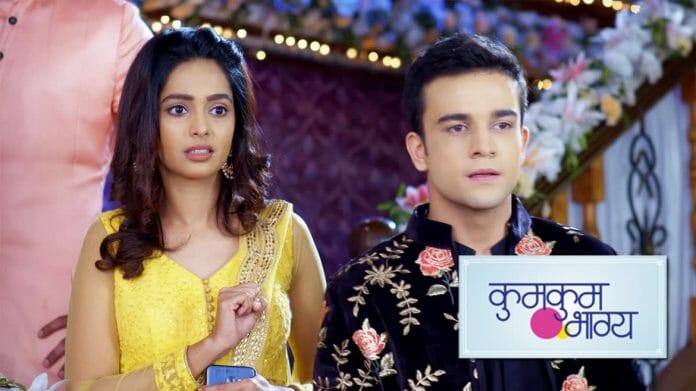 The episode starts with Rhea coming to Alia and asking whom she called and what’s she planning to do. Alia says people in this house favor Prachi so our plans are failing sometimes that’s why I planned an attack on Prachi in outside and my men will snatch her mangalsutra and Prachi has to answer the Pallavi questions. Rhea smiles and asks her to call her men to know what happened. Alia sats good news can come at any time. Rhea smiles.

Prachi prats at the temple. Pandit blesses her giving maata rani chunri and asks her to keep it with her she agrees and leaves the temple. Alia calls Vicky. Vicky tells Prachi is coming out and disconnects the call. Vicky and his men stop Prachi and try to snatch the mangalsutra from her. Prachi shouts and struggles to save the mangalsutra. Ranbir comes there and beats goons. Prachi asks how he came. Ranbir tells he missed the flight. Goons threaten to give mangalsutra to them. Ranbir asks Prachi to give but she refused. Ranbir offers to give money and a diamond ring to her but they refuse.

Goons attack them for mangalsutra. Ranbir sees Prachi struggle and recalls how much it means to her. One the goon snatch it from Prachi. Ranbir beats them. Prachi takes her mangalsutra from the ground. People come there. Seeing them goons leave from there. Prachi couldn’t tie the nupital chain. Ranbir takes her permission and makes her wear it. He wipes her tears and hugs her to comfort her. Vicky and her men stop in the backside of the temple. Alia asks if he did the work. Vicky tells her that someone halted their plan. Alia insulted him saying he can’t do anything. Vicky stops her and tells he will do it. He calls another man near the temple.

Prachi walks with Ranbir. She recalls how he protected her. Ranbir makes her sit in the cab and clears mark from her face. Prachi holds his hand and asks him to wait for a minute. He waits then he moves to driving seat. Vicky and his men attack Ranbir. Prachi couldn’t stop them. She shouts for help. Goons take mangalsutra. Ranbir fights with them and takes mangalsutra from Vicky. Ranbir tries mangalsutra on his hand and he asks Prachi to sit in the car. They sit in the car. Another goon takes the key and asks Ranbir to give mangalsutra. Ranbir refuses then he stabs Ranbir. Prachi gets shocked. She attacks those men. They leave in fear. Prachi takes Ranbir to her lap. She shouts for help but no one helps her. Prachi pleads Ranbir to not close his eyes. Ranbir vomits blood.