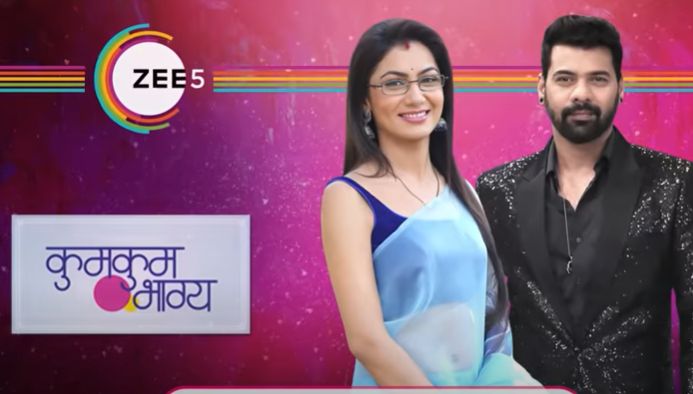 The episode starts with Pallavi saying Prachi that she will never accept her baby belonging to their family. She throws Prachi and warns her to leave their house. Rhea makes Prachi come out of her dreamy state. She asks Prachi to take her. Prachi takes her. Pallavi asks Prachi why she took so much time to bring Rhea. Rhea says it’s not her mistake and I felt a vomiting sensation. Pallavi says the first 3 months puking happens. Prachi thinks she learns it through Rhea otherwise I didn’t know why it used to happen with me.

Pallavi makes Rhea sit in the pooja. Kamaleswari asks the Dad of the baby to sit in the pooja. Alia makes Ranbir sit beside Rhea. Prachi feels bad for her and her baby. Kamaleswari ties Kalawa to Rhea and Ranbir. Ranbir asks Kamleshwari mata to tie kalawa to Prachi’s hand and says she is also a big part of the family. Rhea says Prachi can’t have it as it’s for the parents of the baby. Kamaleswari says anyone can wears it. She makes Prachi wear the Kalawa.

Pallavi asks her to start the pooja. She agrees. Pallavi goes aside and sees her Kalawa. Dida follows her and asks her to share her pain with her. Shahana also tells her the same. Prachi says she is fine and just felt emotional. Dida says we know you and tell me when you want to share. She leaves. Prachi asks Shahana if Dida knows about her pregnancy. Shahana says she doesn’t know otherwise she won’t let it happen.

Kamaleswari says pooja is completed. She asks them to take the blessings of elders. Ranbir and Rhea take the blessings of their elders. Kamaleswari calls everyone to start a traditional celebration song. Ladies sing a traditional song. Prachi feels bad seeing the things and places her hand on her stomach. Kamaleswari says let’s start that Daan Punya ka ritual with a weighing machine. Pallavi places weight of things related to Rhea’s weight.

Kamaleswari asks people to place their hands on the fruits to make the baby get a blessing. They do it. Kamaleswari says this ritual will protect the baby from evil eyes. Alia says these rituals are done and she asks Ranbir and Rhea to dance telling it’s their family ritual. Rhea dances with Ranbir. That time Prachi makes everyone touch fruit for her baby’s wellbeing. Then she leaves. Ranbir tries to follow her. Shahana stops him telling him Prachi needs some alone time.

Pallavi takes Rhea to her room. Rhea tells Pallavi that she is so happy. Pallavi blesses her to have all happiness and tells her she is happy to get grandchildren. Pallavi goes to send off her guests asking Alia to take care of Rhea. Alia tells Rhea that she is going to face a big problem. Rhea asks what she means.

Pallavi says you never gave Ranbir the love that you had to give if you did you would have been pregnant instead of Rhea. Prachi gets hurt hearing this and leaves crying. Shahana tries to go after her. Shahana goes to Pallavi and Alia and asks how can she talk like that. Even if Prachi became pregnant you would call it a bastard’s child and you would not have accepted the child. Alia says yes and now there is no chance of Prachi getting pregnant.