The episode begins with Pallavi telling Prachi that how many ever sweet words she may say her image won’t change in her mind. She humiliates her. Ranbir comes forward and says that Siddharth has said that Prachi should talk to her that’s why they came there. He tells Prachi that he may not able to get her a place in the house but he won’t let her humiliate her. Pallavi applaudes and says that he didn’t even say a word when she was telling her pain but when she spoke against his wife he stood against her. He says that he still respects her, cares for her and loves her. Siddharth tells her that the marriage was not planned and they met when Prachi and Ranbir came to Bangalore to meet him.

Pallavi accuses Prachi and Ranbir saying that they have planned it. She tells him as to how Ranbir met her and told her that he is with a girl and she told him that he will marry the girl she choses. She says that he has planned to take revenge from her. Siddharth tells her that it was not planned. He says that whatever it is he got married to Rhea and he respects it. Rhea removes veil from her face and tells her that she knows what she must be going through. She tells her that she had no choice hence she got married to him. She says that she will stay in this marriage only if she is okay with it.

Gautam is driving his car and tells his dad that he is going tonmeet Pragya. His dad says that he doesn’t understand as to what he wants to do. Gautam says that he likes her. He gets into an accident with abhi. They both get into an argument. Abhi curses him to break up with his girlfriend.

Rhea tells Pallavi as to what happened and how they got into the situation where they got married. Rhea tells her that she had no choice. Siddharth says that he was scared for his life. Rhea says that she was supposed to be her daughter in law but it didn’t happen. Now she has become her elder daughter in law. She says that may be it was written in her fate. Pallavi looks at her.

Pragya asks her pa as to why she didn’t leave abhi out of the house. She says that she can clearly see in the footage that he didn’t leave. Her pa says that he has said that this house was his hence she thought he will leave and he looked good. Pragya says that he is smart. Her pa agrees then covers it up as Pragya gives her a side look. Her pa says that she wasn’t able to indentify him. Pragya thinks that she also didn’t identify his reality ahf trusted him. Gautam comes there and apologises for being late. Pragya says that he is always late. Pragya asks him as to where did he get the Mehra property papers when there is no signs. Gautam tells her that he got them from bank and he will double check it. He gives her the farmhouse papers asking her to keep them with her. She tells him that she is not interested in his farmhouse.

Gautam says that he understands and he can understand her obsession for that mansion. He says that he doesn’t understand as to why she is obsessed with the mansion. He asks her as to why she wants to sell it when she was adamant to buy it. He asks her whether she has any memories with the mansion. She remembers Abhi’s words and tells him that he can keep the mansion if he wants. He asks her to keep the farmhouse then and asks her to visit it in the night. She tells him that it is good to see the property in the day as it won’t be easy to know it at night. He says that he has meetings lined up. Pragya agrees to meet him and leaves from there. Gautam looks at the ceiling keeping both his hands on his waist. The Screen Freezes On Gautam. 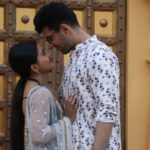