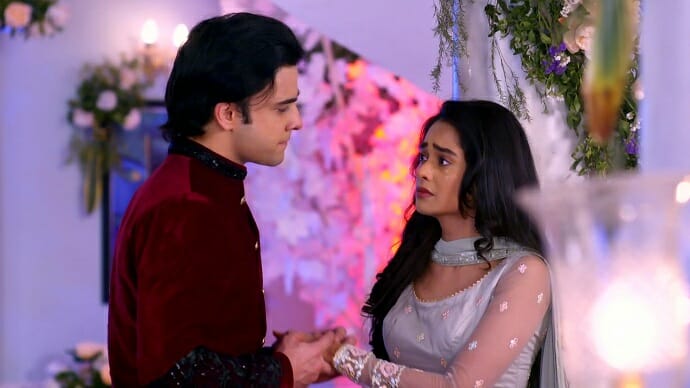 The episode starts with Prachi saying to Rhea that her marriage is fake as she married Ranbir by blackmailing everyone. Rhea says Ranbir lied to you and I know it. Shaina mocks Prachi. Prachi asks her to shut up. Shahana asks Prachi to not take stress as she knows how to shut them. Rhea warns her to shut up. Alia calls Rhea. Rhea leaves. Prachi goes to give medicines to Dida. Shahana and Shaina fight with each other. Alia asks Rhea what happened. Rhea tells what Pallavi told her. Alia tells Pallavi needs to answer me otherwise she has to face the worst side of mine.

Aryan records the fight and asks them to fight more. Mili asks them to not fight. Aryan stops her. Ranbir separate Shahana and Shaina. He asks them to apologize to each other. But they deny it and leave in different directions. Alia goes to Pallavi’s room. Pallavi invites her inside and closes the door. Alia tells Pallavi to not forget about what she can do. She warns her that she won’t bear it if anyone does injustice to Rhea. Dida comes there to see what happens. Pallavi warns her to not talk in this way and stop reacting like Rhea. Pallavi says I told Rhea to divorce Ranbir as I want Prachi here. Dida feels happy hearing it.

Aryan asks Ranbir why he stopped the catfight of them. Ranbir says it’s wrong to see them fighting as they are fighting for Prachi and Rhea and which indirectly may affect Prachi’s health. Prachi hears it and goes to talk with Shahana. Aryan wants to see it but Ranbir stops him.

Alia asks how can she tell it. She says she won’t let it happen. Pallavi asks her to stop questioning her decisions as it’s for everyone’s well-being. Dida feels happy. Pallavi hears the sound and opens the door. Dida leaves. Pallavi says today’s papers will come and Rhea has to sign them. Rhea says she won’t sign any papers and won’t divorce him. Alia seconds her. Pallavi asks them to stop interrupting her. She says papers will reach court but divorce won’t happen as the date will be wrong in it and we have to make Prachi feel comfortable by making her believe that divorce is happening and once the baby is born then I will throw out Prachi from here and I care about my happiness which is in the first baby of Ranbir.

Prachi scolds Shahana. Ranbir asks to calm down. Dida comes there with sweets and asks them to eat sweets telling them she got them the good news. They eat sweets and ask her to tell what’s the news. Dida coughs before she tells them. They make her sit. Rhea and Alia discuss they can’t trust Pallavi. Alia says everything is against them. Rhea says she will think something and goes to her room. Ranbir makes her drink water. Shahana thanks Dida for coming to save her from Prachi’s scoldings. Dida asks what happened.

Prachi tells how Shahana fought with Shaina. Shahana badmouth about Rhea. Prachi asks her to not talk bad about Rhea as she is my sister. Dida thinks Prachi may not like this divorce news. She leaves telling something. Shahana also leaves. Ranbir talks with his baby. He tells Prachi that baby is complaining that she is not taking good care. Prachi says it’s going to be a boy. Ranbir tells her that he imagined how their baby will be. Prachi smiles.