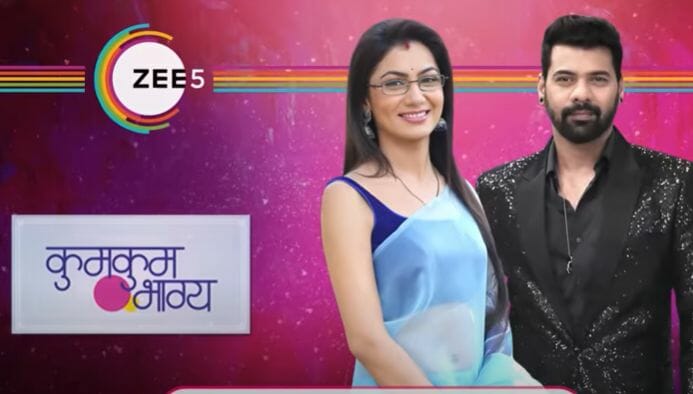 The episode starts with Ranbir saying he will fight for his family till his last breath. Rhea says you will fight when you have a family. She stabs Prachi. Ranbir comes out of his imagination. Stanley asks if he is fine. Ranbir tells Rhea won’t divorce him and he needs to search for some way to get a divorce. He goes to drink water. Stanley collides with Rhea. Rhea fights with him and tells him that her sandals are more expensive than his salary.

Stanley says he already apologised to her. Rhea says you don’t have the status to see me. Prachi stops Rhea and asks her to not test his patience. Prachi apologises to him from Rhea’s side and asks him to enjoy the party. Rhea asks Prachi to not involve in her matters. Stanley gets to know who are they. Prachi asks her to stop attacking him. Ranbir comes there and introduced Stanley to them. Rhea says she is telling him to enjoy the party. Prachi and Rhea leave.

Ranbir takes Stanley to his study room. He says they have to think how to make Rhea sign the divorce. Stanley says Prachi is good and unlike Rhea. Ranbir says Prachi is good but Rhea is short tempered. She took Prachi’s sign on Divorce papers in her inebriated state. Stanley asks him to use the same trick on Rhea. Ranbir agrees and tells he will make business and property in Rhea’s name and I will buy a rented house where we used to stay in the past from Sudha Ji. He asks him to make Rhea drink the spiked drink. Stanley says Rhea may recognize him. Ranbir asks him to ready like a waiter and gives him a dress and a fake beard.

Rhea stops Prachi and tells her that she hates her sweet talks and asks her to not cross her limits. Prachi says you hate everything so concentrate on the party and you already crossed the limit by marrying a married man. Rhea tells looks on. Prachi leaves. Sudha and her family arrive at the party. Sudha tells she doesn’t know he is this rich and I used to scold him. Dida welcomes them. Sudha tells her how she helped Ranbir and Prachi by giving them their apartment. Prachi feels happy seeing Sudha. She goes to meet them.

Ranbir thinks his surprise may get spoiled if Prachi finds that he is buying an apartment. Prachi meets Sudha. She orders the waiter to get fresh food. Sudha tells she has shining like a pregnant woman and tells her they are missing them. Prachi tells she wish to live in that house again. Sudha tells it will happen. Ranbir comes there and stops her from revealing his surprise. Sudha blesses him. Ranbir tells he is feeling nostalgic. Sudha is about to reveal the matter. Ranbir breaks the glass and he takes Prachi with him to the dance floor.

Prachi asks if he is hiding anything from her. Stanley plays the music. Ranbir signs him thank you. Prachi asks how music player suddenly. Ranbir says his well wisher played it. He dances with Prachi. Rhea says why he is dancing with her. Alia says it’s a farewell dance. Sudha and her family recall Ranbir and Prachi’s first anniversary and praise their love. Alia asks them to stop. Sudha says why to stop. Alia leaves from there taking Rhea.

Sudha says Ranbir bought our house as Prachi likes it. Pallavi hears it. Dida thinks to stop Pallavi from spoiling it so she reveals to Pallavi that Ranbir is buying a house to move out Prachi from here. Pallavi feels happy. Shahana hears their conversation and thinks it’s tough to believe that Ranbir is doing it.