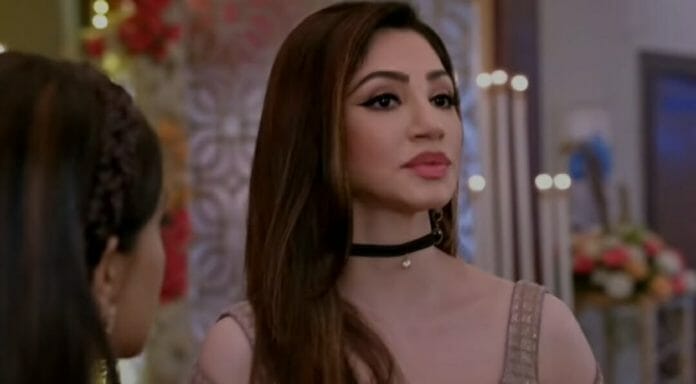 Zee TV Popular show Kumkum Bhagya is attracting viewers with an interesting storyline. currently, Rhea seeks Alia’s help has glued the audience to the screens.
As reported earlier Shahana notices Rhea is following Alia. She feels something is fishy and follows Rhea.

Rhea stops Alia and asks her to not meet her man as they are trying to act over smart and he is not in your control. Alia says she has to know why he called her. Rhea asks Alia to handle the report and tells her that she will meet her man.

Alia agrees and wishes her luck. Alia goes inside. Shahana hides in Rhea’s car trunk. Ranbir writes Pranbir on Prachi’s hand. She gets surprised to see Pranbir. Ranbir says it’s their name and promises her that he will never let it get separated. Prachi gets emotional.

Sid receives the report. Ranbir notices it. The report falls from Sid’s hand and it falls near Aryan’s feet. Aryan takes it. Sid says I can confidently say Rhea’s baby doesn’t being to Ranbir. Sid notices Dna is not matching. Ranbir takes the report and notices it. Madhurima goes to the hospital and learns nurse sends Kinjal reports to Rhea’s house by mistake.

Madhurima calls Rhea and asks her to take her report from the hospital storage room. Shahana hears it and thinks to inform Prachi but it doesn’t happen because of a lack of signals. Rhea calls Alia and informs her that the wrong report is delivered to our house and my report is still in the hospital so do something.

Alia assures her she will do something. Sid says this report is proving Rhea’s lying. Ranbir says it’s not Rhea’s report and leaves throwing it. Sid gets shocked seeing Kinjal’s report.

In the upcoming episode, viewers are going to witness Prachi will confront Alia saying I know Rhea is not pregnant and if you want you can burn this report but the original report is still available on Preethi’s computer and very soon she is going to send it to us then Rhea will get exposed. Prachi advises Alia to stop backstabbing others.

Can Prachi be able to expose Rhea? Why Goon is threatening Alia?
All these questions will be answered in the upcoming episodes.