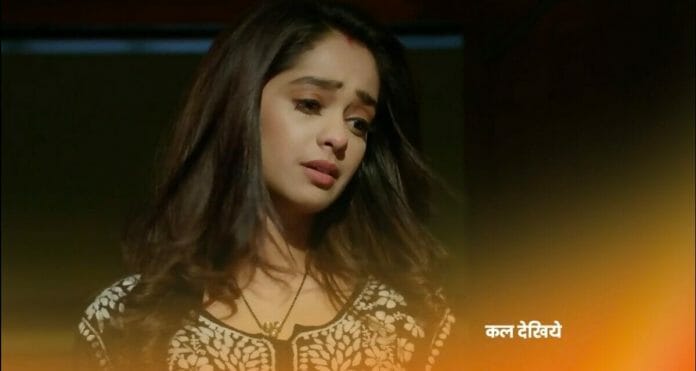 Zee TV Popular show Kumkum Bhagya is attracting viewers with an interesting storyline. currently, Alia assures Rhea that Prachi will leave the house soon has glued the audience to the screens.
As reported earlier, Prachi sleeps on Shahana’s lap. she thinks of her mother. Ranbir thinks of what he did and scolds himself and he thinks that Prachi needs his support and love. Ranbir comes out of his room and sees Prachi is making a sandwich and she accidentally cuts her hand with the knife. Ranbir tries to help. Prachi rejects it at first but later accepts it.

Prachi gets emotional and leaves him. Ranbir eats the sandwich that Prachi half ate. Prachi scolds herself for trusting Ranbir and collapses in tears. Ranbir wards the evil eye off Prachi when she is sleeping. He prays to God for their safety and leaves the room closing the door. Prachi wakes up and notices there is no one.

Ranbir sees Rhea going to Alia’s room while talking on call. He tries to listen to their conversations. Alia tells Rhea that they can talk in the storage room so no one can hear their conversation. Ranbir thinks about how to hear them. Alia takes Rhea inside closing the door. Alia asks her to tell her what happened.

Rhea says Prachi didn’t respond to her requests. Alia says she was in shock as you begged her and Prachi couldn’t sleep because of your pleading. Ranbir thinks about what they are planning. Alia asks Rhea to sleep telling Prachi will leave the house soon.

In the upcoming episode, viewers going to witness Prachi will convince herself saying not to stop here as there is only deceit and betrayal here. You have to move forward for your child. Prachi is shown to be going out of the house and when she will open the door.
Who will change Prachi’s decision? Will Prachi fight back for her baby?
All these questions will be answered in the upcoming episodes.