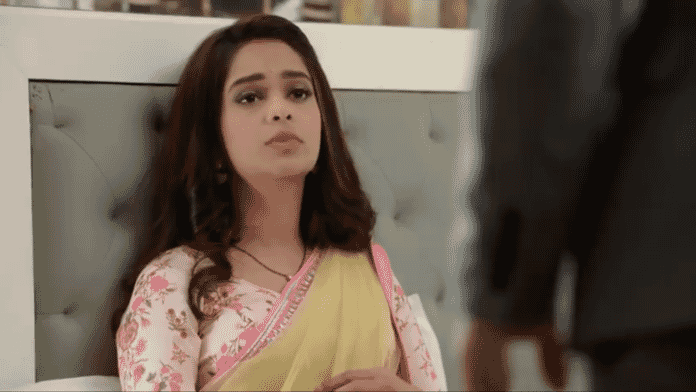 In the previous episodes we saw Prachi receiving the divorce notice from Lawyer. Pallavi tells Rhea that the signature looks exactly like Ranbir’s. She tells her that she don’t want Prachi in Ranbir’s life anymore and she wants to throw that bad luck out of her Life. The Lawyer tells Prachi that Ranbir has already signed and asks her to sign and complete the procedure. Prachi breaks down as she throws the notice on the floor and runs inside her house.
Sushma says to Prachi that Pragya has started a project but she was not able to complete and as her daughter she should complete the project and complete her responsibilities. Sushma gets elated looking at Prachi as she comes her in saree with a hint of attitude. Rhea gives glasses to Ranbir to which he asks her not to do the works that Prachi used to do. Prachi asking man from behind for something but when the man turns around she gets shocked seeing him as it’s Sid.

She runs away from there and her pallu falls on Ranbir’s head. She falls down. Ranbir gets struck. Prachi gets shocked seeing him and Ranbir who looks at her is shocked as well. Sid telling Prachi that it is all Kohli’s plan to make their relationship illegal so that they can break their legal relationship. It is their plan to kick them out of their lives. Ranbir proposes Rhea to marry him sitting on his knees. Rhea agrees to marry him and hugs him. He hugs her back.

In the Upcoming episodes we will get to see Rhea saying to Dida that they will get to know who will be getting salt sprinkled on their wounds. Dida smirks. Sushma says to Sid that they will let this Marriage happen. Prachi comes there saying that this Marriage can’t happen and says with determination that her baby can change everything for better.