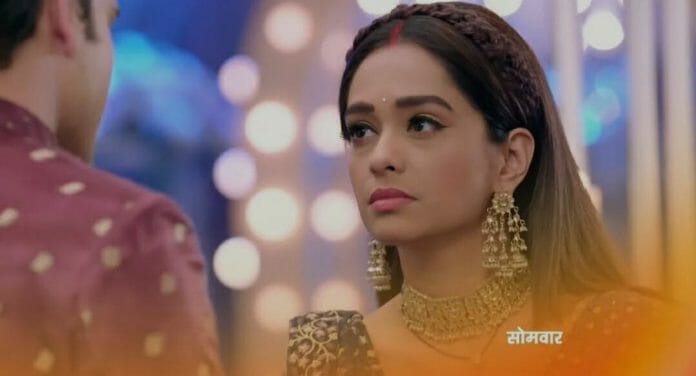 Zee TV Popular show Kumkum Bhagya is attracting viewers with an interesting storyline. currently, Rhea suspects Prachi and Sid are up to something has glued the audience to the screens.

As reported earlier Prachi daydreams about the consequences if she exposes Rhea is not pregnant. Prachi stops Ranbir from drinking alcohol by complaining to Pallavi. Rhea spies on Sid and informs Alia that Prachi is up to something. Alia signs her men. He meets Alia. Alia asks him to do his work.

Mihika tries to alert her brother. The waiter closes her mouth and warns her to stay silent. Everyone is busy with dancers and Singers, that time Waiter takes Mihika with him and hides seeing Preeti. Sid tries to tell something to Prachi but she could not listen because of the noise. Sid dances with Prachi.

Goon calls Alia. Alia takes the call and says he shouldn’t have called. The goon asks Alia to come to the hotel in an hour or she will regret it. Rhea asks Alia what happened. Alia says she doesn’t know and says she feels like something is going to happen. Rhea hearing this feels worried.

In the upcoming episode, viewers are going to witness Ranbir will apply Mehendi on Prachi’s hand. She asks him if he is going to trap her. Ranbir says it’s not easy to trap girls and we can’t write name on hearts with Mehendi so I’m writing it on hand.

Prachi says she will erase it as it won’t be good if someone sees it. She gets surprised to see Pranbir written in love symbol. He explains to her it’s their name. Later Aryan takes a report which falls on the floor. Sid comes there and says it’s Rhea’s report and I can say without checking it that DNA won’t match as Rhea’s baby does not belong to Ranbir. Ranbir takes the report and checks DNA is not matching in the report.

Can Prachi be able to expose Rhea? Why Goon is threatening Alia?
All these questions will be answered in the upcoming episodes.