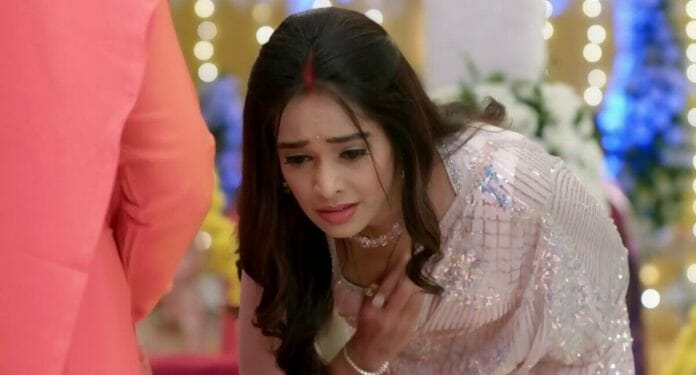 Zee TV Popular show Kumkum Bhagya is attracting viewers with an interesting storyline. currently, Rhea stops Ranbir from proposing to Prachi has glued the audience to the screens.
As reported earlier, Ranbir receives a message from Stanely and learns Prachi went to Saritha’s house. He goes to meet Prachi and convinces her to return home and requests her for a few hours to set everything and tells her she will get her answers. She agrees. They return home. Ranbir says it’s nearing 12. He tells he is going to tell what he feels for his special person infront of everyone.

Shahana thinks he may going to propose to Prachi again. Rhea sees he is seeing Prachi and learns he may propose to her. Ranbir says everything is for. Rhea falls from the step. Everyone hears the sound and rushes to Rhea.

Ranbir asks Stanely to not reveal their plans to anyone. Stanely agrees. Prachi tells Shahana that she senses from Ranbir that he knew about my pregnancy and he is planning for our new start in that apartment for our baby. She cries.

Shahana asks her to not cry. Ranbir comes there and tells Prachi that Rhea will be fine. Doctor comes out and tells them that it’s good news, Rhea is fine and she is pregnant. Ranbir and Prachi get shocked. Pallavi and Alia congratulate Ranbir for becoming a father and send him to meet Rhea.

In the upcoming episode, viewers going to witness Pallavi will tell Ranbir that Rhea is having his baby and he will become the heir. She will ask him to at least respect the baby’s mother if he cant love her.

The priestess will come and blesses Prachi and her baby. Alia will say Rhea is just pregnant and not her. Priestess says blessings don’t go waste and will be fruitful.
How did Rhea become pregnant? Is it Rhea’s plan to get Ranbir?
All these questions will be answered in the upcoming episodes.