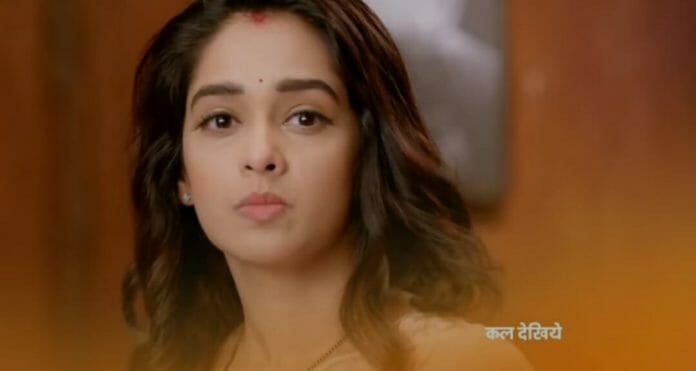 Zee TV Popular show Kumkum Bhagya is attracting viewers with an interesting storyline. currently, Alia kills Pragya and Abhi has glued the audience to the screens.
As reported earlier Alia questions Rhea why she spoiled her plan of taking revenge on the Kohli family. Rhea asks Alia to accept her defeat and says they can start everything afresh.

Alia says she never accepts her defeat and tells Rhea that she lost because of her. Rhea says I don’t want to be like you and you’re looking like a loser. Ali warns her to not call her a loser. Rhea says you failed to separate Abhi and Pragya then how can you separate Ranbir and Prachi. Alia gets angry. She locks Rhea in the room and tells her that she won’t leave Pragya. Alia drives the car drinking wine.

Prachi wakes up from her sleep and asks Ranbir to get her pani puri. Ranbir goes to get pani puri. Rhea escapes from the room through the window. She calls Prachi for help. Alia goes to Pragya and Abhi’s room. She is in a drunken removes the oxygen mask from Pragya.

Prachi rushes to the hospital and notices her mom is struggling to breathe. Rhea escapes from the house. Prachi knocks on the door and asks Alia to not punish her mom. Alia says your sister called me a loser and challenged me and now I will prove to her what I can do.

Alia in a drunken state falls on Abhi and his mask gets removed too. Prachi asks her to see it. Alia says everyone will die. Prachi breaks the glass and enters the room unlocking the door. She calls Doctor and asks him to check her parent’s state.

On road, Rhea cries for help. She stops Ranbir’s car. Ranbir asks her what happened. Rhea in tears says Pragya’s life is in danger and asks him to take her to the hospital and asks him if didn’t Prachi tell him.

Ranbir assures her nothing will happen to your mom and he takes her with him to the hospital. Alia leaves from the room. The doctor checks Abhi and Pragya’s pulses and reveals to Prachi that they are dead.

In the upcoming episode, viewers are going to witness Rhea will reach to hospital and ask Prachi what happened. Prachi cries and tells Rhea that Alia killed Maa and Papa. Rhea and Prachi cries. Prachi swears to get Alia punished on their 13th death day. Alia is brought to the court and smiles.

Will Alia repent for her mistake? will Alia change seeing Rhea’s realization?
All these questions will be answered in the upcoming episodes.