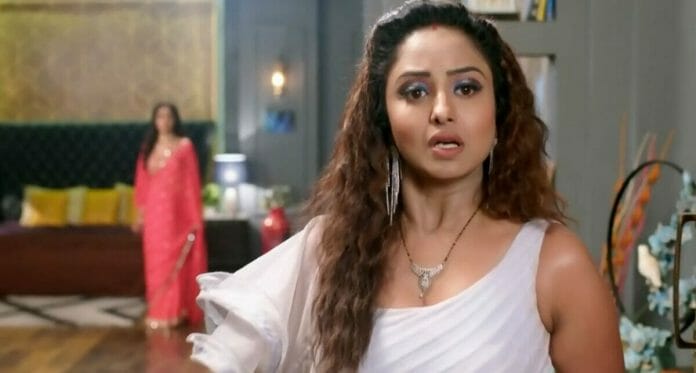 Zee TV Popular show Kumkum Bhagya is attracting viewers with an interesting storyline. currently, Pallavi reveals to Prachi that Ranbir plans to oust her has glued the audience to the screens.
As reported earlier, Ranbir helped Prachi against the door and he decided to not confront Prachi upon considering the consequences that might ensue. Ranbir goes out the window. Stanley escaped from Rhea and Pallavi. Ranbir searched for divorce papers. Sudha called him but he leaves telling her he will come. Sudha got angry and leaves the party with her family. Ranbir didn’t get the cover.

Rhea saw the cover and asks Pallavi about it. Pallavi told her she gets it from the living room. Rhea said it belongs to Ranbir. Pallavi asked her to keep that in cover and asks her to call Vikram. Prachi came there and asks what happened to Dida. Pallavi said she got drunk by mistake. She asks Prachi to leave her son and daughter in law room. Dida woke up and scolds Pallavi. She threatened to jump from the window if Prachi doesn’t scold Pallavi and Rhea.

Prachi said to Pallavi that she mistreated her even though she considers her as her mother and says her mang will always have Kumkum of Ranbir. Pallavi said time will change everything. Dida loses her consciousness. Prachi made her sleep. Pallavi told Prachi that Ranbir brought the rented house and planned to oust you.
In the upcoming episode, viewers going to witness Rhea will tell Prachi that Ranbir is going to propose to her. Prachi will get shocked. Pallavi will tell Prachi that you don’t want to leave but Ranbir will send you. Rhea will ask Prachi to keep her problems limited to herself as Ranbir doesn’t want to get solved. Prachi will reveal she is pregnant. Rhea will get shocked.
Can Ranbir clear Prachi’s confusion? How Ranbir is going to tackle the web of lies?
All these questions will be answered in the upcoming episodes.