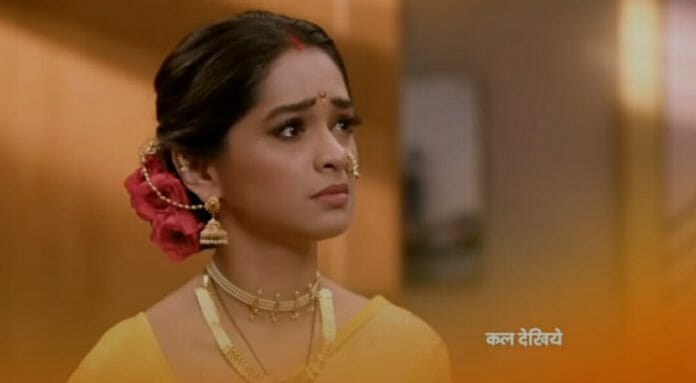 Zee TV Popular show Kumkum Bhagya is attracting viewers with an interesting storyline. currently, Prachi is devastated with Pallavi’s decision has glued the audience to the screens.

As reported earlier, Sid asks Pallavi to rethink her decision. Pallavi asks did you think this when you have crossed all limitations of the relations. She says think of my decision as the punishment or compensation for your doings and this is the only way to save Prachi and her baby. Ranbir asks what she means.

Pallavi says Prachi did wrong to us. Alia badmouth Prachi’s character. Sid shouts at Alia to stop. Vikram stops Sid. Ranbir asks Sid to rectify his mistake by marrying Prachi and accepting her baby. Prachi and Shahana get shocked to hear it.

Rahul decides to teach a lesson to Alia with his friends by stealing her necklace for mistreating him and his girlfriend. Pallavi says visarjan will happen in the evening and engagement will happen in the night. Prachi says I will not do any marriage.

Everyone gets shocked. Pallavi says I am not asking you, but telling you, this marriage will happen as we don’t have illegitimate relations. Prachi breakdown into tears. Shahana consoles Prachi. Rhea tells Alia that she is happy.

Alia says Ranbir won’t go to Prachi once she gets married to Sid. Rhea says wish it happens soon so I can live happily with Ranbir after marriage. Alia advises her to make Ranbir happy from now itself. Rhea takes Ranbir to dance with him.

When Prachi is walking a decoration piece falls beside her she picks it up. Prachi decides to put it back by getting on the stool. Ranbir stops her and says this is not safe for her. Prachi thinks of what Ranbir said to Sid.

In the upcoming episode, viewers going to witness Ranbir will tell Prachi that if she had told him about her pregnancy truth then he would have accepted her and her baby happily.

Prachi feels disgusted and gets teary eyes. Sid will ask Rhea and Alia not to do planning and plotting and to think from the heart and not from the mind. He asks them to stop ruining their lives. Pallavi will come there and hears him.

Will Ranbir ever get forgiveness from Prachi? Will Prachi be able to prove her innocence?
All these questions will be answered in the upcoming episodes.