In the today’s episode we will get to see Rhea is passing by Prachi and Siddharth. Prachi is about to get up to search for Ranbir but Siddharth holds her hands and asks her to sit for two minutes. Rhea clicks their pictures as they sit together. She says that she has just doubted them but they are making it real. She says that they are spending romantic time together and smirks. Rhea then brings Ranbir there to provoke him again her but her plan fails and she gets upset. She laters tells Ranbir that a girl and a boy can never be friends. Ranbir laughs hearing her. On the other side Gaurav records the video of Abhi talking to the constructors.

In the upcoming episodes we will get to see Ranbir telling Rhea that there is nothing like what she thinks. He says that he will prove this to her. Rhea says that if he proves he is right but then if she proves otherwise she is right. Abhi thanks Pragya for making him meet with his memories looking at the guitar in his hands. Pragya says that she is making him meet with himself. Police comes to her house and says to Abhi that he is arrested. Aliya asks why. Police says for the murder of seven people. They all gets shocked hearing him.

What will Rhea do? How will Pragya solve the problem? Will Rhea get successful in seperating Ranbir and Prachi? 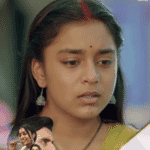