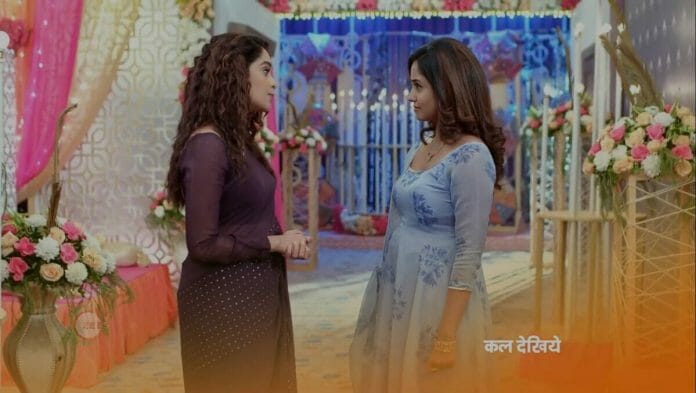 Zee TV Popular show Kumkum Bhagya is attracting viewers with an interesting storyline. currently, Alia Wonders about Prachi and Sid’s engagement has glued the audience to the screens.

As reported earlier, Sid threatens Rhea and Alia to invite Mihika to Sangeet. On another side Prachi and Ranbir spend time together. Rhea tells Alia that they need to bring Mihika to Sangeet otherwise Pallavi won’t leave them. Alia says it’s risky and inviting Mihika is like inviting a problem.

Rhea says they need to take this risk. Ranbir thinks something is changing between Prachi and him in a good way. Prachi is about to slip but he holds her. Alia hears a sound. Alia and Rhea go out and notices Ranbir holding Prachi. Rhea says one of them will always slip and the other will help, it’s common for them.

She takes Alia inside. Ranbir carries Prachi in his hands. Alia and Rhea see them in shock. Ranbir makes Prachi sleeps on the bed and asks her to take rest. Rhea says Prachi is engaged to Sid and she is sati Savitri type so don’t know how she is behaving with Ranbir in this way.

Alia doubts Prachi may not be engaged to Sid and if it’s true then we are getting trapped in Prachi’s game without our knowledge. Rhea feels scared and asks what she means.

Alia advises her to not show her fear to Prachi and she says they need to know what’s running in Prachi’s mind and we have to be extra cautious and tomorrow we don’t need to plan anything but we need to answer Prachi’s questions in our way. Rhea agrees.

In the upcoming episode viewers are going to witness Prachi will tell Sid and Shahana that she will provoke Rhea so that she does some mistakes. Later Rhea will challenge Prachi saying tonight, I will get you married to Sid immediately after Sangeet. Prachi will smirk and promise to Rhea that she will expose her before Sangeet ends.

Can Prachi be able to expose Rhea? How Rhea and Alia will answer Prachi?
All these questions will be answered in the upcoming episodes.