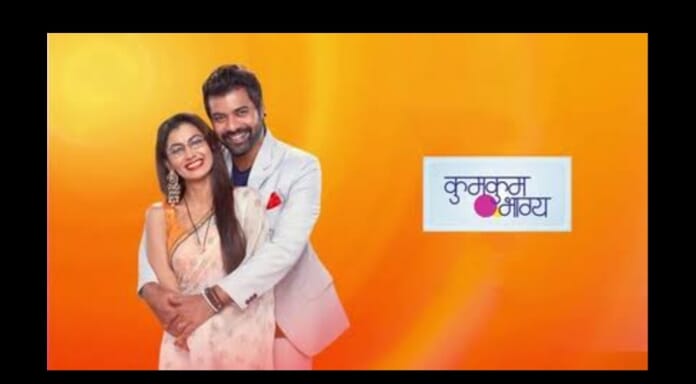 Zee TV’s popular show Kumkum Bhagya is all set to engage it’s audience with it’s interesting plot. I show have garnered huge response from the audience and is now running for years. The show has been dubbed into many languages and got great response in other languages as well. The makers wants to keep the audience hooked to their Television screens with their twists and turns.
The show’s main leads Abhi and Pragya are loved for their sizzling chemistry. Pragya and Abhi are seperated due to misunderstandings. Their daughters Rhea and Prachi are now daughter in laws of the Kohli house. While Prachi wants to get back with her sister, Rhea wants to take revenge from her and wants to get back with Ranbir. Prachi doesn’t know about Rhea’s intentions and trusts that she has really changed.

In the past episodes we saw the hotel staff congratulating Prachi for her pregnancy and showing her the strip. Prachi gets shocked but at the same time feels elated. She remembers Ranbeer’s words about giving birth to a daughter like her and how he would take care of her thinking her to be Pregnant. Siddharth gets a call from Pallavi whom he greets formally and asks who is it. Pallavi says that he is being formal to which Siddharth says that she has broken her relationship with him hence he is being a stranger to her.
Vikram snatches the phone from her and humiliates him. He calls him ungrateful and tells him that he is the one who gave him shelter to which Siddharth says that they have already done his final rights. Pallavi snatches the phone from him and tells him that she has called him to tell him that Rhea and Ranbeer are getting Married and she called him to tell him not to come there and cuts the call. Siddharth says that it doesn’t matter to him as to whom Rhea marries as she is no one to him and he knows her real face. Siddharth goes to Prachi and tells her that it has happened.

Prachi says that even she is shocked and doesn’t know what to say. Siddharth says that so even she got the call and says that Ranbeer and Rhea are getting married. Prachi faints. He holds her and calls Sushma. Prachi wakes up and tells him that she is Pregnant. Sushma hears this and congratulates her. Siddharth decides to call Ranbeer and tell him about it but Sushma stops him and asks him to let the Marriage happen.

Prachi comes there and says that it can’t happen and she will stop the Marriage as the baby can change their fate. Sushma tries to stop her but Prachi is adamant. Sushma breaks her ties with Prachi as she choses her relationship with Ranbeer over her. Prachi leaves from there apologising to her. Rhea tells Shaina that it was always told that one’s Kumkum Bhagya is written when they are born but in her case she has changed the destiny of Prachi who thought that Ranbeer is written in her fate and not hers.

She says that Ranbeer is finally going to be hers. Dida comes there and tells her that she can’t fool her like she does with others and soon she will get the taste of her medicine. Rhea says they will see whose wounds will hurt once they get married. Prachi travels through the car to reach Delhi so that she can stop the wedding. She goes to Kohli mansion and finds out that the Marriage is happening in the banquet hall and decides to go there.

On the other hand Ranbir hopes for Prachi to stop the wedding and imagines her. Rhea thanks Pallavi for everything she has done and tells her that she us like her Mother and Shaina is like her sister. She hugs her happily. Ranbir tells Vikram that he can’t do this and he can’t break Prachi’s promise. He tells him that he will tell Rhea and she will understand. He rushes to the upstairs but before he can reach there, Vikram drags him and threatens him of committing suicide if he does anything like that. Ranbeer sits in the Mandap and imagines Prachi in place of Rhea. While doing the rounds, their Gatbandhan breaks and Prachi comes there asking to stop the wedding. She tells him whatever Rhea has done and even Siddharth joins her. She asks Ranbeer to decide whether he really wants proofs to trust her.

In the Upcoming episodes we will get to see Pallavi shouting at Prachi and shouting at her asking her how dare she come to the Marriage and stop it. She warns her to leave and asks Ranbir to carry on with the rituals. Prachi shouts at her to stop it and then goes to Ranbir. She tears the garland from his neck and throws it on the floor. She looks at him furiously.