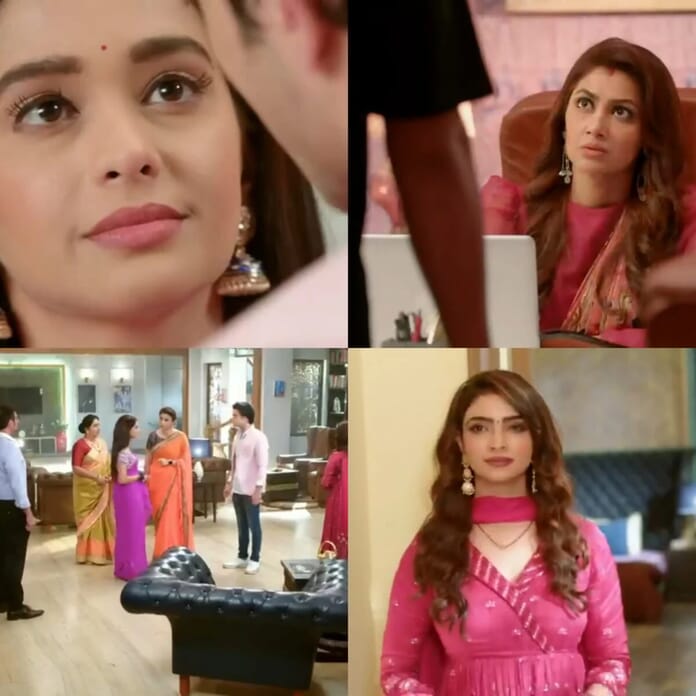 In the past episodes we saw Tanu telling the family that they are now going to Pragya’s house. They gets excited. Rhea on the other hand confronts Siddharth and asks him to leave the room and sleep outside. Siddharth does as asked. Rhea then puts up an act infront of Ranbeer gaining his sympathy. Tanu comes to Pragya’s house with the family.
Aliya and Tanu vow to destroy Pragya and snatch everything from her. Sushma hears their conversation. Dida prays to Lord Rama to keep her Pragya and Abhi together. All three of them join hands to defeat Tanu and Aliya. Siddharth notices Rhea’s weird behaviour near Ranbeer. Dida notices it as well and warns Prachi but she says she has changed. Tanu and Aliya asks Pammi and Mitali that if they wants to stay in Pragya’s house forever then they should provoke Dadi so that she fights with Pragya and Abhi distances himself from her.

Mitali and Pammi join hands with them. Abhi searches for alcohol in the house but he didn’t get any. Pragya says alcohol is not allowed in the house. Tanu says that Abhi has changed now and his hands start shaking when he doesn’t get alcohol. Abhi’s hand shakes. Later Pragya sees him drinking alcohol and asks him where did he get it. He denies to tell her as Aliya has given him the alcohol.

Rhea wakes up from her sleep and thinks that without Siddharth she felt good in the room. She tells the same to Siddharth and asks him to give her space. Tanu and Aliya asks Mitali and Pammi to instigate against Pragya. They try to instigate Dadi making her think about their words. Siddharth leaves to Bangalore leaving a note for her. Rhea uses the note to spend time alone with Ranbeer. She comes up with a fake story gaining sympathy from Pallavi.

In the upcoming episodes we will get to see Prachi asking Ranbir whether he will give his heart to some another girl to which he says he will never until she is with him. Rhea hears them and smirks. Pallavi tells Prachi that Rhea has to go to her friend’s marriage but she can’t go alone. She tells her that Ranbir will go with Rhea. Ranbir smiles at Rhea.
Abhi tells Pragya that it is not hard for him to earn money. He tells her that he will start earning from where he has lost his money. He tells her no one can stop him from drinking once he gets money and says he will see how she will stop him then.