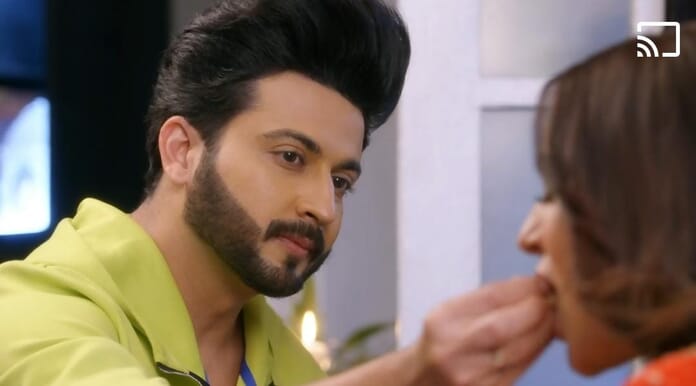 Episode begins with Sherlyn says she will call Rakhi and wonders why she went to buy Mahesh’s medicines when she kept pooja in the house. Kareena tells her to inform Rakhi that everyone is here. Girish informs Preeta,Sristy that Karan called them.

Kareena takes Ramona inside the house. Sristy says she should have informed Rakhi too because Sherlyn calling her. Preeta says she handled that issue and says when Rakhi was getting ready to leave for market, she removed battery from her mobile. Sristy praises her.

Preeta says she wanted Rakhi to stay away from this so Sherlyn could not able to instigate her or use her again because today Rakhi has to know about Ramona’s truth. She says she called the Driver and told him to bring Rakhi here because she need to be here on time. She says this time they can’t escape and had to confess their crimes and its time to reveal their true face to everyone. Preeta acts like she is shocked seeing Sarla there.

Sarla says Rakhi forced her to attend this pooja. Preeta says she is glad that her mother also going to participate in this pooja. Kareena asks did she know about this pooja already. Preeta says she just guessed seeing the Priest in their house. Ramona asks Priest that for what this pooja happening. Preeta interferes and says it would be for Mahesh’s health only. Kareena says enough of talking and tells the Priest to start the pooja.

Preeta recalls how she told Sristy to execute their plan once Ramona brings sweet box. Ramona  calls Girish and tells him to distribute the sweets she brought. Dadi comes there and asks what’s happening here. Mahira says Rakhi kept pooja. Sristy says she is hungry and asks Girish to bring food for him. Ramona tells him to give the laddus to Sristy which she brought. Sristy thanks her and starts to eat those laddus.

Sherlyn notices that Preeta signalling something to Sristy and wonders what are they planning now. Priest greets her and tells her to sit for pooja. Rakhi gets confused seeing Priest and before she says anything, Sristy starts to shout and runs towards the washroom. Rakhi tells the Priest to continue the pooja.

Preeta says Sristy vomiting and blood coming. Sristy comes there with blood and says Ramona tried to kill her because she ate her laddus only. Ramona asks why she would try to kill her. Sristy says one day she throwed stone on her car so she is taking revenge on her. Ramona says there is no poison in these laddus.

Preeta was keep saying that Ramona mixed poison in these laddus. Ramona says she mixed poison in sargi laddus not this. Everyone shocks hearing her. Sherlyn realises that Preeta wanted to expose Ramona and now she can’t do anything to help her. Preeta says so it was Ramona who mixed poison in her laddus but Police arrested her mother. Rakhi asks how Ramona can do this with her daughter in laws.

Mahira tried to defend her mother but Karan warns her to not cover up now because her mother confessed right now. Preeta tells Sherlyn to withdraw her complaint which she gave against her mother. Rakhi takes stand for Sarla. Ramona apologize to Rakhi and Luthra’s. Rakhi tells her to apologize to Sarla.

Ramona apologize to Sarla. Sarla forgives her. Karan praises Preeta, Sristy for their smartness. Preeta says its about trust and they wanted to prove Sarla’s innocence that’s why they did all this.