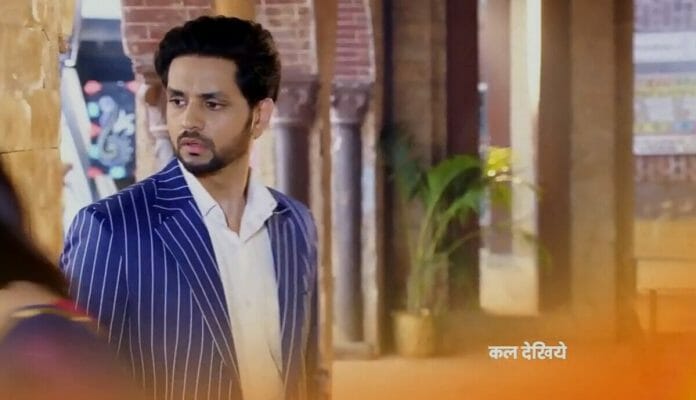 Episode begins with Rakhi and Dadi talks about Rishabh and Preeta getting worried for Kavya. Rakhi says that Arjun worried for Kavya like Kavya is his daughter. Dadi tells her that Arjun love Kavya so much and it’s visible in his face. Rakhi agrees with her. She says that Preeta hate Arjun so much. Dadi praises Arjun. She is upset that no one praised Arjun for his bravery. Rakhi tells her that she stayed silent for Preeta. Dadi hugs her.

On the other hand, Arjun tells Preeta that he did not hire Raja for anything. Preeta tells him that Raja tried to kill Kavya because Raja has enmity with Arjun. She says that she will make sure that Arjun never goes near Kavya. She says that Kavya is nothing for Arjun. She adds that Arjun is danger for Kavya. He tells her that he will meet Kavya and no one can stop him from meeting his daughter. He throw away the court order. She tells him that she just came to give restraining order and if Arjun want to end up in jail then she don’t care about it. She leaves from there with Rishabh.

Later, Preeta recalls the moments she shared with Karan seeing their photos. Arjun tells Anjali that he won’t forgive Preeta. He decides to marry Preeta again to get Kavya. He says that he will become Preeta’s shadow. Rishabh asks Preeta that if she has not slept yet. Preeta tells him that she is going to sleep in Kavya’s room and leaves from there. He thinks that Arjun snatched Preeta’s peace.

Arjun asks Preeta that if she did not recognize him yet. He tells her that she loved him. He says that she made his heart beat fast. Preeta takes Karan’s name. He tells her that he is her Karan. She hugs him. She tells him that she know he will return. Rishabh takes Preeta from there and it turns out to be Arjun’s dream. Arjun screams Rishabh to leave Preeta. Anjali comes there and makes him come to reality.

Preeta hears Karan’s voice. She wakes up. Kavya also wakes up. She asks her mother to not get scared. She starts singing lohri. Preeta hugs her saying that she is not scared now. She thinks that Kavya is the best gift which Karan gave her. Next day, Preeta learns that Rishabh has been nominated for best businessman award and she informs about it to Luthras. Luthras congratulates Rishabh.

Episode begins with Arjun and Anjali reaches Luthra house. Arjun tells Mahesh that he want to meet Kavya. Mahesh tells him that Kavya is sleeping. Rakhi tells Arjun to go and see Kavya. Arjun thanks her. She tells Srishti to take Arjun to Kavya’s room. Srishti takes Arjun from there. Anjali follows them.

On the other hand, Janki gives medicine to Beeji. She asks her to not worry about Kavya because Kavya is fine now. Beeji picks Preeta’s call and tells her that she is glad Kavya is fine now. She learns that Rishabh is beside Preeta. She asks her to put the phone on speaker. She tells Rishabh that she saw everything on TV. She says that Arjun saved Kavya. Preeta tells her that everything happened due to Arjun. She says that she don’t want to talk about Arjun now. Beeji asks her that if the latter did anything against Arjun. Rishabh asks her to come to Luthra house and disconnects the call.

Arjun gets emotional seeing Kavya. He holds her hand. He thinks that her hands are like him. He recalls the moments he shared with her. Srishti wonders that why Arjun crying like Preeta. Anjali thinks that she can understand what Arjun feeling right now. Arjun places a kiss on Kavya’s forehead and leaves the room. Anjali follows him. Arjun thanks God for keeping Kavya safe. Anjali consoles him. Srishti wonders that why Arjun has this much attachment with Kavya. Sameer comes there and he asks Srishti that why Arjun is crying. She says that she don’t know. She tells him that she heard Arjun is rude but she never saw his emotional side. She says that she never expected Arjun to cry like this for Kavya. He tells her that Arjun is really unpredictable.