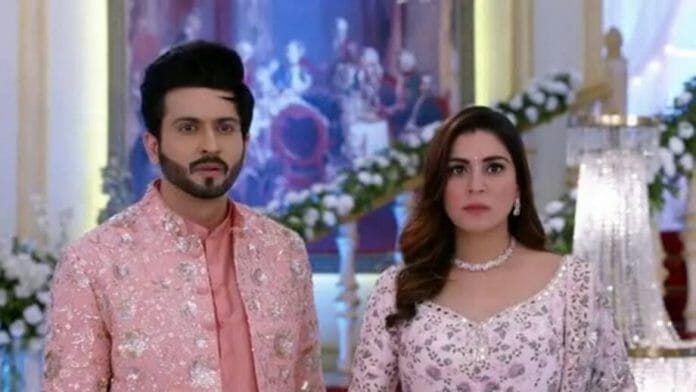 Episode begins with Srishti tells Preeta that it must be Natasha who stole the proofs from Preeta. She says that she saw Natasha following Prithvi from the court. Preeta says that they are thinking so much. She tells her that Prithvi is responsible for the accident. She recalls the accident and gets glimpses of seeing Natasha in the accident spot. She reveals that it’s Natasha who stole the proofs from her when she was in semi consciousness state. She adds that Natasha arranged new confession video of Sandesh and saved Prithvi too. She says that she won’t leave Natasha and leaves from there.

Karan comes downstairs. Preeta tries to talk to him but he ignores her and leaves from there. Natasha tells Preeta that she genuinely wanted to save Karan that’s why she worked hard to collect proofs. She adds that she will talk to Karan about Preeta so he doesn’t ignore her from now on. Preeta tells her that she don’t want a third person to interfere in her and Karan’s matter. Natasha tells her that everything changed in her and Karan’s relationship. She asks her to prove that she stole proofs from her and leaves from there. Sherlyn sees everything.

Natasha tells Karan that Preeta also tried to prove his innocence so he should not treat Preeta like this. She adds Preeta is lady boss of this house still. He tells her that he don’t care about it and leaves from there.

Preeta tells Karan that she can’t clear his misunderstanding if he don’t talk to her then. He tells her that he understood that she is against him and leaves the room. He drinks and recalls the moments he shared with Preeta. Natasha holds Karan when he is about to fall down. Karan notices Preeta and asks her to not waste her time and money on him. He leaves the house with Natasha.

Preeta sees someone sneaking into the house. That guy throws something in Sherlyn’s room and escapes from there before Preeta catches him. Meanwhile, Sherlyn finds the parcel and gives it to Prithvi. He gets shocked seeing R written on it. He tells Sherlyn that Dubai Don sent it and they hired him for Rishabh. Luthras gathers in the hall and refuses to believe Preeta when she said about stranger guy.