Episode begins with Preeta says Manager is right, she is not from cleaning department but hotel appointed her in secret mission to enquire staffs behaviors. She says if he asks more questions then she have to complain about him too for interrupting in her mission and then he can face the consequences. Manger leaves from there asking her to continue her secret mission. She thinks now she has the master key.

Prithvi asks Sherlyn to leave from hotel and he is also going to leave with Rishab and Rana will take care of Karan. Sherlyn asks where is Rana now. He says he sent Rana to buy something important because if Rishab comes to conscious then it will put him in big danger. He says he doesn’t want anyone else to come to hotel so Sherlyn going to the house is best idea. Sherlyn leaves from there. Karan struggles to untie the rope and curses Preeta for going out without untying him. He says she did this to prove she is more smart than him. He recalls the moments he shared with her and gets angry on him for trusting her again and again. Sameer and Sristy meet Preeta.

Preeta asks why Sristy took risk by coming here for her. Sristy says how can she leave her sister alone when she is in danger. Preeta apologize to Sameer on behalf of Sristy for troubling him. Sristy says he troubled her. Sameer asks Preeta about Karan. Preeta says whatever happened to them and makes fun of Karan saying Kidnapper doesn’t even know he kidnapped karan luthra the famous cricketer. She shows the master key to them and says now they have to search the room where Rishab is kept. Sristy tells her that they suspect a room in which the kidnapper is present.

Mahira calls Sherlyn and asks to be honest with her instead of keep lying. Sherlyn says she is in luthra house only she will meet Mahira in 10minutes. Mahira says she knows that Sherlyn is not in the house right now and she also know in which hotel she is now. She says Sherlyn knows who is the kidnapper if she didn’t tell the truth then she is going to tell everything to luthra’s.

Sherlyn tells the room number to Mahira. Rishab threatens Prithvi to leave him and Karan and he will give him whatever he wants. Prithvi asks him to stop shouting saying it’s a sound proof room so no one going to hear his voice. Rishab says Prithvi doing wrong and asks him to listen him but Prithvi leaves from there.

Prithvi asks Rana to go to parking and be ready to escape, he will join him with Prithvi. Rishab says Prithvi will regret for doing this with him. Prithvi makes him unconscious. Preeta, Sristy and Sameer reaches the room where Rishab kept. Mahira too reaches the hotel. She gets call from her mother. Ramona says others may go wherever they wants but Mahira should stay in the house because it’s her marriage day. Mahira says marriage will happen only when Karan will be there na and asks her to notice everything which happening in luthra house.

Ramona scolds Mahira for talking like this. Rakhi asks Kareena to drive fast. Mahira asks Ramona to understand her situation, she wants to marry Karan today. She asks who will help her. Ramona says Mahira’s father can help but for that they have to tell him the truth of Mahira marrying Karan. Mahira shocks hearing that. 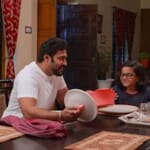