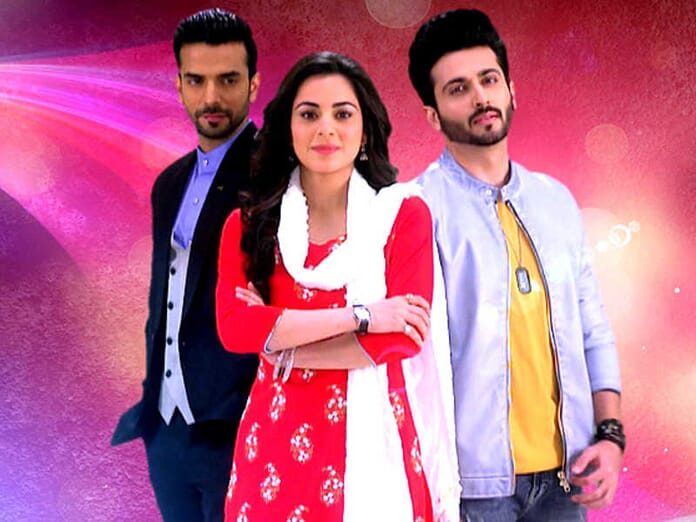 Episode begins with Sristy says Karan is right, there is chance of Prithvi being Kidnapper. Preeta scolds Sristy saying she did mistake by telling her this Karan says anything without thinking and she too hates Prithvi that’s why saying like this. She says Kidnapper told she is intelligent and Karan is dumb, in his jealousy he put the blame on Prithvi. She says let’s stop that discussion and they should start to search Rishab which is more important now.

Sherlyn gets relaxed seeing them leaving from there. Prithvi hides with Rishab hearing Preeta’s voice. He shocks seeing her and thinks how she came outside. Preeta takes Sristy’s mobile and calls Prithvi. Prithvi gets relived thinking his mobile was in silent mode otherwise he would have been caught by her. Preeta says she is calling Prithvi but he is not picking her call. Sameer asks why she is calling him. Preeta says to know about Prithvi’s whereabouts and will asks him to video call her. She says how can Karan put this much big blame on Prithvi saying that mask man is Prithvi so she wants to confirm.

Prithvi thinks he won’t attend her call. Preeta says he never fails to pick her call, maybe because it’s Sristy’s number that’s why and leaves from there. Prithvi says he likes the blind trust she have on him. He scolds the Manager saying how he allowed other people in that floor when he booked full floor. Manager says he didn’t noticed and Prithvi just doing party not something wrong so why to care about all these. He says his shift finished so he is leaving.

Mahira meets Sherlyn. Sherlyn says Preeta, Sristy, Karan everyone is in this hotel only they should not see them together otherwise they will lands in big trouble. Mahira asks what else she is hiding from her. She says Sherlyn says she wants Mahira’s marriage with Karan but other side she is keep lying to her about everything. She asks why Sherlyn doing kidnapping drama on her marriage day. Sherlyn says Kidnapper is not someone professional but he is her love.

Mahira shocks hearing her. Sherlyn says she knows the Kidnapper and can’t say anything else. Mahira says because of Sherlyn she is going to lose everything. Sherlyn says nothing wrong happened with Mahira. She says Karan is still alive and just tied up with chair. Mahira says Rishab was kidnapped then what happened to Karan. She says how can Karan gets kidnapped now how her marriage will happen. She says what Preeta saved Rishab and Karan and starts to blabber. Sherlyn asks her to stay calm.

Mahira reaches Karan and unties him. He gets surprised seeing her there and follows Rana. Rana informs Prithvi that Karan escaped and some girl helped him in that. Prithvi assumes Preeta helped Karan to escape. Karan meets Preeta and says he himself untied him he doesn’t need anyone. Mahira comes thereand says she helped Karan and asks what Preeta doing here. Preeta says she is searching Rishab. Karan says she is here to prove she is daring girl and he is weak and tells how she tied him again. He says she is here to save the mask man because that’s Prithvi.