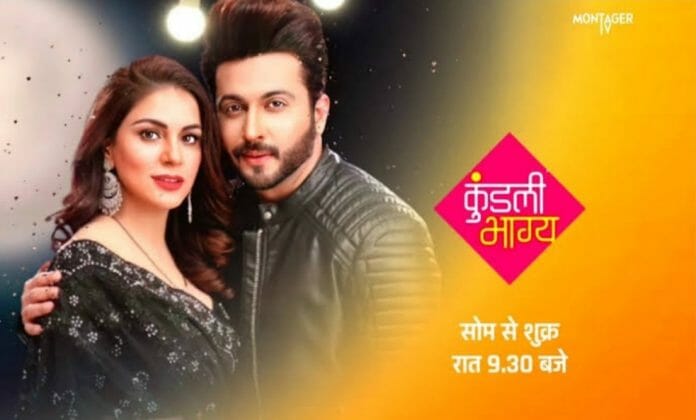 This week Kundali Bhagya begins with Sherlyn informs Kareena that Sanjana returned so Natasha returning house. Natasha says that she want to stay in Luthra house. Kareena tells her that Sanjana must be feeling lonely so the latter should leave. Sherlyn ousts Natasha out of the house. Natasha leaves from there but gets shocked seeing someone and run away from there. Outside Luthra house, Preeta tells Srishti and Sameer that they have enough proof to prove Karan’s innocence. She calls Bodhi’s hotel manager and talks to him about his hotel’s CCTV footage. He tells her to visit the hotel tomorrow. Preeta tells everything to Sameer and Srishti and asks them to reach the court first. Natasha hears everything and gets a permission from Sherlyn to stay in the Luthra house for a night. She thinks that tomorrow Prithvi will leave the house.

Next day, Luthras meets Karan in the court. Preeta meets the manager and sees the CCTV footage. Manager tells her about Karan’s duplicate and gives his confession video to her and also the CCTV footage. Prithvi recalls that how he saw Preeta’s car outside Bodhi’s hotel. He realises that he met Karan’s duplicate Prince in that hotel only. He calls Sandesh and learns that Srishti met the latter. Court hearing starts and Karan feels Preeta’s absence. Preeta notices Prithvi and runs from there. Prithvi chases her and throws stone at her and she falls down. He notices the proofs and tells her that she can’t take them to the court and she lost now. She tells him that she won’t lose and kicks him and runs from there. She gets in her car and leaves from there. He follows her in his car.

Karan tells Judge that he don’t know that how the money bag came into his car. Prosecutor mocks Karan. He shows Karan and Sandesh’s picture. Karan says that Sandesh is his fan. Prosecutor shows the pictures which Prithvi clicked in Karan’s room. Prithvi says that Preeta has no rights to live so she has to die now. He hits Preeta’s car. After some time, Prithvi drags Preeta out of the car. She beat him up and puts him in her car dicky. Judge says that proofs are against Karan. Preeta stops the Judge from giving the verdict saying that Karan is innocent. She says that Prithvi is the real culprit and she has proofs to prove that. She realises that proofs are missing.

Kritika scolds Preeta and defends Prithvi. Then Natasha stops the Judge from giving the verdict. She says that Karan is innocent and gives Sandesh’s confession video to the Judge. She recalls that how she stole proofs from Preeta when the latter was unconscious. And how she made Sandesh confess again and recorded it. She points at Prince and tells the Judge that Prince looks like Karan from back. She says that Sandesh and Prince framed Karan in the match-fixing case. She murmurs to Prithvi that she has proofs against him so he should be grateful that she is not exposing him. Judge asks the police to file a case against Prince. He says that Karan is innocent and orders to release him. Luthras gets happy.

Karan thanks Natasha and ignores Preeta. Prithvi taunts Preeta. Sameer tells Karan that Preeta tried a lot to gather proofs to prove his innocence. Karan tells him that it looks like Natasha did all the hardwork. Kritika asks Prithvi about his injuries. He lies about an accident and says that he won’t forgive Preeta. Karan doesn’t let Preeta hop in the car and leaves from the court. Kareena thanks Natasha for saving Karan. Natasha criticises Preeta’s actions saying that Preeta never wanted to save Karan. She says that she risked her life to gather proofs to save Karan.

Preeta enters Arora house and recalls Karan’s recent behaviour towards her. Karan goes to Mahesh’s room and tells Mahesh that he miss him so much and asks him to get cured soon. Arora’s discusses about Natasha and her proof. Preeta says that she is glad that Natasha saved Karan because she lost the proofs. Karan packs Preeta’s clothes. Sherlyn asks Natasha to leave the house. Natasha tells her everything and warns her to not even think to throw her out of the house.

Srishti praises Preeta’s plan and hardwork. She says that it looks like Natasha made a deal with Sandesh. She adds that it must be Natasha who stole the proofs from Preeta. She says that she saw Natasha following Prithvi from the court. Preeta says that they are thinking so much. She tells her that Prithvi is responsible for the accident. She recalls the accident and gets glimpses of seeing Natasha in the accident spot. She reveals that it’s Natasha who stole the proofs from her when she was in semi consciousness state.

Natasha tells Sherlyn to arrange her cupboard. Sherlyn glares her and leaves from there. Preeta enters the house and says to Natasha that the latter stole the proofs from her. Natasha tells her that she was also investigating the case to prove Karan’s innocence. Preeta refuses to believe her. She notices Karan and tries to talk to him but he ignores her. Natasha tells Preeta that she genuinely wanted to save Karan that’s why she worked hard to collect proofs. She adds that she will talk to Karan about Preeta so he doesn’t ignore her from now on. Preeta tells her that she don’t want a third person to interfere in her and Karan’s matter.

Later, Preeta tells Karan that she can’t clear his misunderstanding if he don’t talk to her then. He tells her that he understood that she is against him and leaves the room. He drinks and leaves the house with Natasha. Preeta sees someone sneaking into the house. That guy throws something in Sherlyn’s room and escapes from there before Preeta catches him. Meanwhile, Sherlyn finds the parcel and gives it to Prithvi. He gets shocked seeing R written on it. He tells Sherlyn that Dubai Don sent it and they hired him for Rishabh. Luthras gathers in the hall and refuses to believe Preeta when she said about stranger guy.

In the upcoming episode, Karan will tell Natasha that he loved Preeta the most and she is the one who broke his heart always. Preeta is about to enter Prithvi’s room but stops hearing 50 crores from Prithvi.