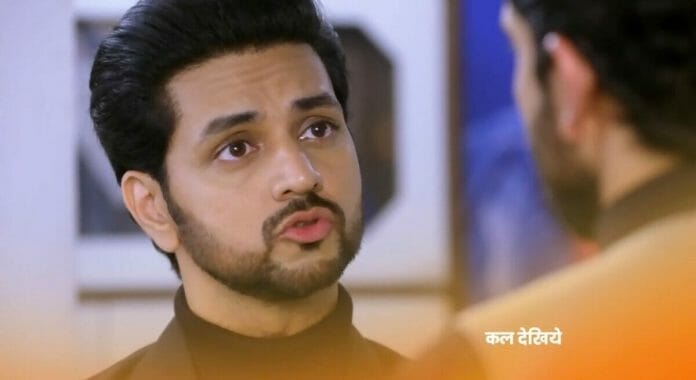 Shraddha Arya and Dheeraj Dhoopar starrer Kundali Bhagya is one of the top Zee TV show. It has been around for a long time now and it was an audience favorite at all times. Now, Anjali decided to help Karan to get his revenge on Preeta and Rishabh so it will be interesting to watch that what going to happen in the future episodes.

Earlier it’s seen that, Kavya got excited seeing Rishabh and hugged him. Rishabh said that she is the best gift which God gave her. Karan reached the road side tea stall and recalled that how Rishabh consoled him there. He said that he can’t get emotional because emotions makes a person weak.

In the police station, Anjali asked Police inspector to write missing complaint of Arjun. Police inspector asked her to come after 24 hours. Srishti told Rakhi that Sameer is such a bad husband because he came late yesterday night. Rakhi reminded her that he already informed them that he is busy with auction works.

Kritika informed Luthras that how one stranger guy saved her from goons. She said that she felt some connection seeing him. She cried saying that she missing Karan so much after seeing that stranger. Anjali called Karan and told him that she was worried about him.

He apologized to her for leaving without informing her. Next day, Rishabh took Preeta and Kavya for school. Rakhi told Srishti that Kavya brought happiness to their family and it looks like small Karan returned in their life.

In the upcoming episode, Kavya will ask for candy floss so Rishabh will stop the car. She is about to hit by a truck but Karan will save her. Karan will yell at Rishabh and Preeta for their carelessness. He will take Kavya in his car.

Rishabh and Preeta will follow Karan’s car. Karan will talk to Kavya to divert her attention so Doctor can inject her. He will notice that she is talking like him. Preeta and Rishabh will reach the hospital and get relieved seeing Kavya fine.

Doctor will say that Kavya is fine because of Karan. Rishabh will thank Karan. Sameer will inform Rishabh about auction. Srishti will scold him for not informing her about auction which is going to happen on Karan’s death anniversary day.

Anjali will tell Karan that he changed from the time he took Preeta’s name. He will reveal that his wife and his brother tried to kill him so he wants revenge. She will tell him that she will help him to get his revenge.

Will Karan visit the school again? How Anjali going to help Karan? Will Anjali tell Nidhi about Karan’s revenge?