Episode begins with Veer and Amrit marrying. Vashma, Uday and Randhir are angry. Randhir feels emotional. Veer tries to make Randhir hurt by praising Amrit as his wife. Nalini is halpy with Veer’s decision. Pandit ji asks to tie the knot for pheres. Nalini does that. Randhir remembers her moments with Amrit and gets angry. Veer thinks, from today Amrit is mine and I won while Randhir lost, this should have happened long back. The pheres arw completed and then during sindoor ritual, the sindoor box is not opening so Randhir opens it. While opening some sindoor is about to fall on Amrit’s forehead but Veer catches it before it falls. Veer then takes from his hand and puts sindoor. Pandit ji declares them husband and wife.

Nalini says you had snatched my dream of seeing your marriage, today I m seeing my dream getting fulfilled. She hugs Veer. She cries. She says I love you a lot. Veer says I also love my mum a lot, you won the elections, I chose a good bahu for you. Nalini says I hope you will understand your responsibilities. Amrit nods. Veer says we will take blessings of all. He asks Randhir to bless them. Uday says I m angry, you made a big mistake. Uday and Vashma leave. Veer asks Randhir will he leave or be a part of his happiness. Randhir’s kurta gets stuck with Amrit’s kaleerein. Veer angrily breaks the tie. He asks Randhir to leave. Amrit recalls Randhir and cries.

Saroj says Veer had insulted Randhir, now we will also get rid of Randhir. Vashma says Randhir’s innocence is proved in the court. Saroj scolds her for eyeing Randhir also. Uday and Bhanu ask Saroj to think before speaking. Saroj goes. Vashma says we lost Amrit, we shall not lose Saroj, its sorrow to lose family, Saroj got bitter tongued, we will convince her. He hugs her.

Amrit comes to her room. She recalls Randhir’s words. She imagines Veer with her. She cries and thinks its my loyalty to you, I had sacrificed my love to save you.

Precap:
Randhir meets Amrit. Veer and Randhir have a fight. Amrit comes there and stops Randhir. 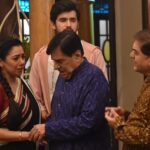