Episode begins with, Veer entering the haveli with Anandita. He makes her sit, then Rani sahiba says this jewellery is for you, after wedding you will be known as Daultabad’s Rani as Daulat of Daulatabad. Veer praises Anandita with the necklace. Veer taunts Rani sahiba saying she keeps family as number one even horses of our mahal are royal and family members. Anandita says I love horses. Veer’s dad sees the tension and asks Veer to make Anandita see the mahal. Veer takes her around. Anandita sees a crown in a shelf and takes it and wears. She asks Veer how she is looking? Veer says you are looking beautiful. Anandita then sees a toy and plays with it. Veer remembers his brother and asks Anandita to keep it aside. But Anandita plays with it and also takes a damroo and plays it. Veer is unable to take all the flashbacks and starts drinking then he gets so angry he takes the damru from Anandita forcefully and breaks the damru and Anandita falls. Veer shouts on her shocking everyone. Everyone gathers there. Rani sahiba and Anandita’s dad are angry. Anandita and her dad leave angrily breaking ties with Veer.

Here, Amrit is im deep thoughts and remembers all what Saroj and that lady told. Then, Amrit leaves the house and on her way she imagines talking to herself. The other version of her is saying she is going from house and that is selfish. Amrit says I am going so that everyone can live their lives happily. The other version says no you are running away from your duties, Bala and Kiran’s wedding broke do to your mistake and you are running away from your duties to make things right. Amrit cries and thinks you are right, I am just running away from my duties and Randhir would have never wanted me to take a low road and run away from duties. She cries and goes to a mata rani temple. Here, Veer comes there in his car, drinking. He remembers past flashback where Rani Sahiba taunts him that he has everytime made a blunder of everything whether in childhood or studies or business and now even in your relations. Then, he says I m not incomplete, I will get a bride, I can get any girl, I am a complete man. Amrit sees the temple and cries talking to Lord. Veer comes drunk. He sees her and recalls meeting her. He gets the chunri and goes back to the car. Amrit comes back home. She sees Babli crying. She consoles the girl and takes her along. She speaks to the people. She asks what’s the mistake of this girl, burn your hatred, I m not asking anything much, if you think I m wrong, then fine, at least spare this girl, I beg you all. Amrit sees Saroj and smiles. She unpacks her bag. She speaks to Randhir’s pic.

The officer says you are getting freed, that girl will be lucky who you miss so much, does she also miss you. Randhir says she can’t forget to remember me. Amrit cries. Randhir says I m coming Amrit, now no one can stop us from uniting. Amrit calls out everyone. She says that groom’s family has come. Saroj asks why did they come. The groom’s family happily come. Veer also arrives there and meets Amrit.

Precap:
Veer says I want to talk to you. Randhir says pray that I meet Amrit soon. Bhanu says Veer has asked for your hand. 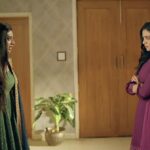 Namak Issk Ka: Satya realizes Kahani might be her own sister. 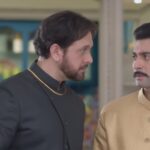 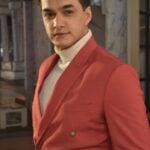