Episode begins with drunk Veer taunting Amrit why she is crying. Amrit thinks of Rani ma’s words about being a good daughter in law. Amrit says I will support you as a wife. Veer says I don’t want sympathy, I want love. By mistake he pushes Amrit a bit and she falls. Veer gets flashback of childhood when his brother fell because of his actions. Veer panics and apologies. Veer faints. Amrit tries to wake him. Randhir comes and lifts him. Mohan comes and taunts Nalini about her decision to give her seat to Veer in future. Mohan says I will not let anyone ruin the family legacy. Amrit asks Randhir not to get into this, she can handle her husband. Randhir goes.

Uday and Vashma have a moment. He says I m going to meet the commissioner, I will find Kabir. Vashma says he is in my prayers. He says our family will complete, once we get Kabir, we will tell everything to the family. He goes. Saroj throws chilli powder in Vashma’s eyes and scolds her. She asks about Kabir. Vashma says give me water, please, Kabir is my son. Saroj asks whose blood is he.

Veer asks did you do the work. Servant says yes. Veer says it means its Randhir’s last night in the house. Randhir asks Nalini to sign all the papers. She signs the papers. He gives her a gift. She asks what’s this. He asks her to see. She likes the sweets. He says I heard you telling about your fav sweets in an interview. She asks did you get this for me. He says yes. Veer looks on. She gets happy. Veer says its good you told me about Randhir’s plan. Servant says yes, I got similar sweets and a similar box. Nalini asks Randhir to give the sweets to Amrit, ask her to serve it along with the breakfast. Randhir goes to Amrit. He helps her. The servant changes the sweets box. She goes away. Veer looks on. Saroj scolds Vashma. She says I think this child isn’t of Uday. Vashma scolds her back. She says Uday is my first and last love. Saroj asks her how did she meet Uday, how did she manage her life for four years. Vashma cries.

Veer comes to Amrit. The sindoor falls by her hands. He says I m your husband, don’t forget you are my wife, you dropped the husband, but I won’t let you succeed. He cuts his finger and applies the blood in her maang. She taunts him and says I m just your property, you snatched me from someone else. He asks her to clean her face and get breakfast for him.

Randhir sees Amrit. He throws the plates and says sorry, its a mistake. He receives a letter and goes. Amrit thinks love means sacrifice sometimes. Veer asks servant to keep the poison bottle in Randhir’s cupboard. Servant keeps it and locks the cupboard. Veer says Randhir will be blamed for giving poison to Nalini, he will be going away. He thinks Amrit will serve the laddoo to Nalini. Amrit serves the laddoo to everyone. Amrit sees some stain on the laddoo and makes Nalini throw it. Nalini asks what’s this. Amrit says this sweets have something mixed in it, sorry. Vijender says yes, she is right, someone mixed poison in it, see the blue colour. He thanks Amrit. Randhir looks on. Veer asks who wants to kill Nalini, Randhir, you got these sweets from the market, right. Randhir says yes, but I had tasted the sweets myself before buying it, no one knows here that I got the sweets for Nalini. Veer says yes, but you knew it. Randhir asks why would I try to kill her. Veer says you know it. Nalini says Randhir won’t do this. Veer says you are in politics, he can be bought by anyone. He says we shall check all the rooms well. Randhir agrees. Veer asks them to come. They all go to Randhir’s room. Veer winks to the servant. Amrit sees this and thinks why is Veer doing this. She asks did you do this to frame Randhir again. Veer smiles.

Precap:
Amrit and Randhir slip and fall down in the lawn. Veer looks on. 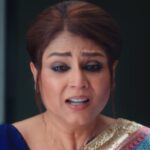 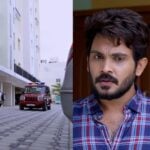 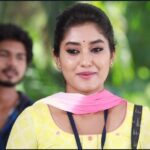 Kaatrukenna Veli: Vennila to get excited knowing about ethnic day celebration at the college