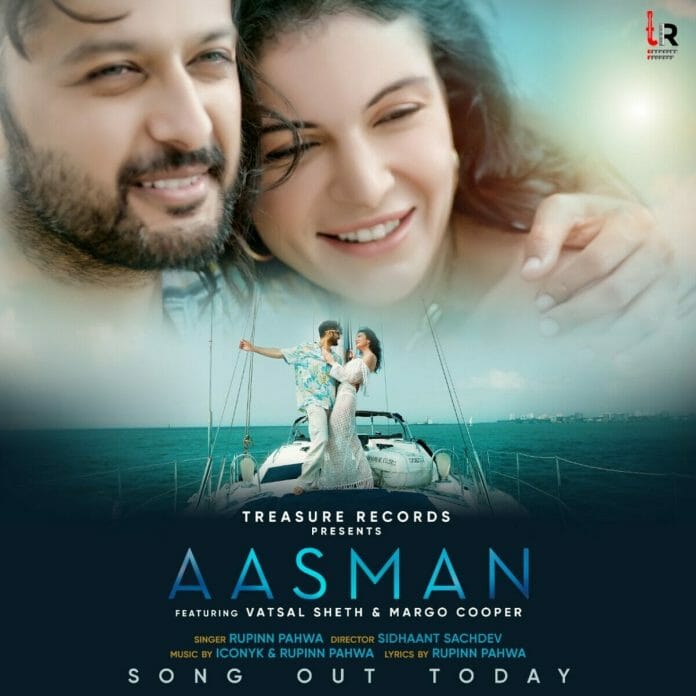 Treasure Records, a new aspiring and outgrowing music label platform has launched a new music video with Rupinn Pahwa,  one of the most remarkable singer, composer and lyricist in Bollywood. The song “AASMAN” features Taarzan: The Wonder Car movie, the famous Vatsal Sheth and the dynamic Margo Cooper (Miss World Bulgaria 2019). The song showcases a romantic chemistry between them. The director of the music video is well-known industry Sidhaant Sachdev, known for his projects such as ‘Spotlight 2’, lyrics written by Rupinn Pahwa, composed by ICONYK & Rupinn Pahwa  and produced under the banner of Treasure Records.

Rupinn Pahwa is a young and dynamic artist who has playback and composed the music for popular films like “Veere Di Wedding” and “Koi Nhi and more”. His new venture with Treasure Records, which paves the road for aspiring singers, composers of music, and lyricists. Rupinn trusted the significant reputation of Treasure Records, and now, the synergized combination of these two has amazed the listeners.

At the song launch, Rupinn Pahwa stated “With my new song AASMAN, which I think is a song of every age group and will be adored by everyone; I want to keep on creating music that will touch the hearts of my fans and millions of others”.

While the team at Treasure Records is committed to progress, they also want to provide musicians and other producers a place to express themselves and make engaging movies and music. As a result, it was intended for the musical journey with AASMAN to express a sense of youthful love through the catchy lyrics and Treasure Records.

Director of the song, Sidhaant Sachdev said “This is my third stint with Treasure Records. The song AASMAN has its own charm and vibes, I feel really fortunate to be a part of such a dynamic team. I’m hoping the audience will adore this one just as much as they adored JAANIYA”. Also, there is a hidden message that we tried to spread through this song and this is also the feel and vibe of the song that is “Take that break,to celebrate your love”.

The entire crew, including the lead actors Vatsal Sheth and Margo Cooper, had a great time during the shoot. At the end of the shoot, the entire team had transformed into a big family working together, which was very overwhelming.

The lead actor of the song Vatsal Sheth says, “This is the first time I am working with Treasure Records and it’s been an absolute pleasure working with them the song Aasman is amazing and brilliantly compose, sung and of course, the music video is come out so amazing and I am in love with it and this is my 6th project with Director Mr. Sidhaant Sachdev of the music video. So, it has been a pleasure.”

Speaking on the launch, Margo Cooper says “When I take on a project, good people and a team of good professionals are very important to me. Despite the fact that the language is Hindi, it was not a challenge for me, thanks to this incredible team. It was also a pleasure to work with Vatsal, an accomplished actor and professional. I believe the Indian audience appreciates good visuals, good stories, and good music, and Aasman has all of these elements. I’d like to thank Treasure Records for trusting me with Aasman, and I hope to make more music videos in the future.”

As one of the youngest new-generation Indian music label companies, Treasure Records has paved the way for its publicly-loved hit songs before. Treasure Records are enriching steadily yet thriving for more and achieving more.

Treasure Records is a young 2021-based company which leads to the fact that they have achieved a lot in a short period. The company was founded by Mrs. Deepti Gupta, the CEO of Treasure Records, along with her husband Mr. Deepak Gupta in the position of Managing director. The overall motive of the company is to provide real talent in the industry with an uncomplicated path. From the start till now, Treasure Records have never let its audience down and they plan to do the same in the coming future.