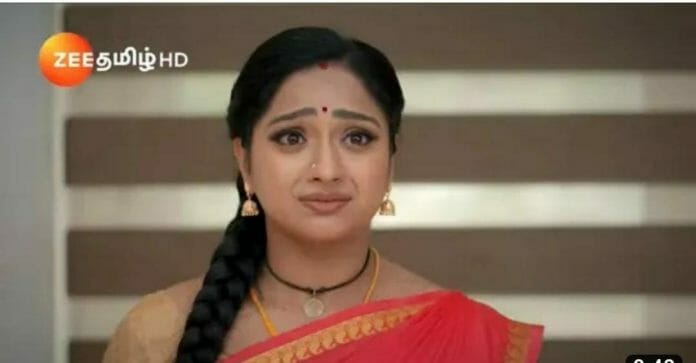 Maari is newly launched show of ” Zee Tamil”. Maari has the innate ability to see the future and foresee impending dangers. Now series focuses on Maari will agree to Thara’s condition

In the previous episode we saw; Maari took a good care on Hasini. She expressed her gratitude to Maari. Later, Thara informed the family members that she brought a new alliance for Surya. Three girls will come here to meet them. Surya wants to choose anyone from it.

Surya and Maari shared a painful eye lock. Thara handover the responsibility to Maari. She assured to do it for Surya’s happiness. Jagdish argued with her for it. Maari accepted her condition. Later, Surya requested Vickram to help him find Maari’s real parent.

In the upcoming episode viewers will see; Surya will ask Maari to say what’s on her mind. He will stop this wedding arrangements. Maari will ask him to marry a girl who match to him.

Later, Aravindh will loose the screw of Chandler. His uncle will find out Aravindh planning to kill Surya in the function. Later, Vickraman will ask the doctor to give a detailed report of the poison given to Surya. He will reveal something to him. A strange person will keep a close watch on Vickram.

What will happen next? Will Maari go to Surya’s house?